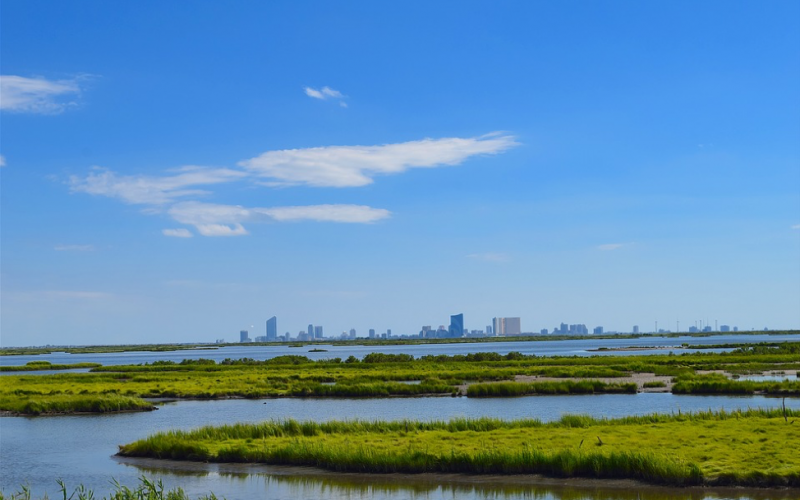 Over the past 300 years, wide swaths of coastal wetlands have been drained for farmland, cleaved in two by highways, or blocked from life-giving tides by seawalls and levees. These blocked salt marshes are known as impounded marshes. In the U.S., this has been the fate of more than half of our tidal wetlands. Worldwide, coastal wetlands are destroyed faster than nearly any other ecosystem. Though these wetlands only cover a small portion of our planet, their impacts are much larger than their size may suggest. The carbon stored in plants and soil helps regulate our planet’s climate and buffer against global warming. Healthy salt marshes store more carbon per acre than almost anything else on the planet.

Researchers from the U.S. Geological Survey Woods Hole Coastal & Marine Science Center and their partners studied the relationship between tidal wetlands and climate change, published in a 2017 report in Nature Scientific Reports. The team of scientists compiled information from across the U.S. to estimate the area of impounded wetlands and compare flows of carbon dioxide and methane through healthy and impounded marshes.

In healthy marshes with regular tidal flows, plants decompose slowly and store carbon in the soil while constant influxes of seawater prevent the formation of methane. When marshes are blocked from saltwater tides, they fill with freshwater from rain or runoff. As marshes become less salty, plants decompose faster, storing less carbon dioxide and releasing more methane. Methane is especially problematic because it traps far more heat in the atmosphere than carbon dioxide per unit. Over twenty years, an impounded wetland the size of a soccer field can contribute as much to global warming as leaving a small fleet of cars running for that entire time.

However, there is room for hope: the researchers found that restoring tidal flows to impounded marshes can quickly and effectively prevent the release of these powerful greenhouse gases that contribute to climate change. Interestingly, tidal marsh restoration was even more effective at reducing greenhouse gases in the atmosphere than other common carbon storage methods like planting trees to restore forests.

As human-caused greenhouse gas emissions continue to soar, restoring tidal flows to wetlands can help stem the tides of climate change.  Scientists and policymakers around the world are embracing the idea of “blue carbon,” the carbon stored in coastal ecosystems, as an important part of local and regional plans to address global warming. Blue carbon offset markets can be used to fund restoration projects, which can be as simple as expanding a culvert or building a tide-gate and allowing the tides to rush back in. These funds can also be used to protect tidal flows in healthy marshes, which could have an even bigger impact by entirely avoiding the elevated emissions caused by impounding marshes. For millions of acres of impounded marsh in the U.S., tidal restoration is an efficient, fast-acting, long-lasting way to store carbon and reduce methane and carbon dioxide emissions, and meet emissions offset goals.

Healthy wetlands have benefits far beyond carbon storage: they protect us from damaging coastal storms, reduce algae blooms by removing nutrients, and provide sheltered nursery areas that support important fisheries. As a cultural and recreational resource, they have provided peaceful retreats, wildlife watching, and artistic inspiration to generations of people. When we restore salt marsh as part of plans to address global warming, we also make our coastal communities stronger, healthier, and safer for generations to come.