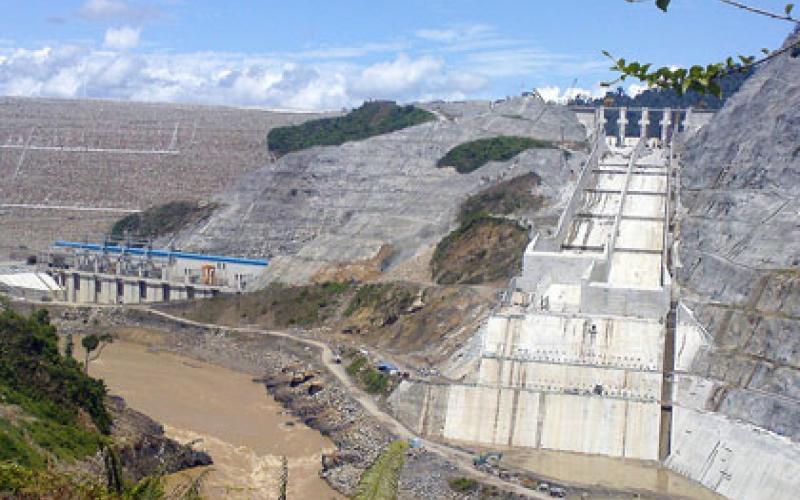 In 2008, Sarawak, a Malaysian state on the island of Borneo, launched the Sarawak Corridor of Renewable Energy hydropower project (SCORE) which comprises twelve dams and will install 20,000 megawatts of electricity covering more than 70,000 square kilometers. By multiplying its electricity production by a factor of 15 by 2030, Sarawak aims to attract heavy industrial investments of over US$100 billion. It also intends to improve infrastructure, to encourage capacity development, and to promote tourism. Sarawak's first big dam alone, the Bakun Dam now generates 2,400 megawatts, tripling Sarawak's electricity production. Another dam, Murum Dam, is planned to start operating in spring 2013. However, the first steps of implementation have been subject to substantial criticism due to a number of problems.

Researchers from the National University of Singapore have recently published an article in Renewable Energy that explores the controversies surrounding the mega-dam project SCORE. The researchers applied a mixed approach of literature review and the collection of field data through 85 interviews with 37 institutions. They find four main categories of drivers and expected benefits of the program: investment and industrialization, improved energy security, more equitable development between the Malaysian states and within Sarawak, and spillover economic benefits. Furthermore, the project claims to contribute to greenhouse gas emissions reductions.

During their investigations, the researchers find that while a way to overcome decades of colonialism for some, the mega-dam project is a direct threat to cultural survival for others. They list that a number of constraints that have not been taken into account sufficiently might jeopardize the stated goals of SCORE. In addition to the technical, economic, and environmental challenges, legal and social constraints must be addressed as well. More than 200 lawsuits have been filed against Bakun Dam alone and forced resettlements have disrupted thousands of indigenous people from their traditional land. The flooding of vast areas of land exacerbates the threat of extinction of endangered animal and plant species while economic challenges include cost overruns. Furthermore, greenhouse gas emissions from rotting vegetation in the vast submerged areas could backfire on the ambitious climate goals of Malaysia.

In conclusion, the price for mega energy projects like SCORE that lead to rapid transformational change could be too high. While these centralized projects have the support of powerful coalitions that champion economies of scale, they often fail to achieve their officially stated goals and leave out important broader development aspects. Approaches that focus more on incremental installation over several decades and carefully assess their stepwise impacts might be more feasible and equitable.

This insight is especially important for countries that have expressed interest in launching similar mega hydropower projects, including Indonesia, Cambodia, Thailand, Laos, and India.