Read below the review of our second event by the Yale Center for Law and Policy’s Elizabeth Bourguet. 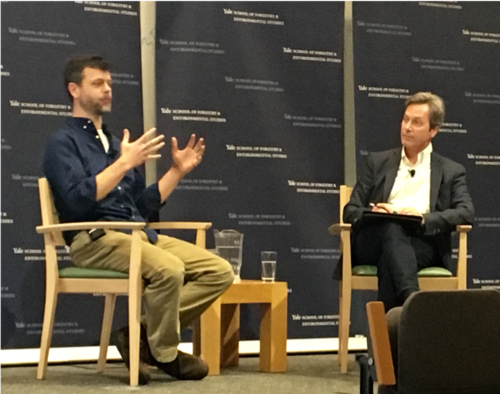 The field of climate reporting is evolving, and David Roberts has witnessed this evolution over the course of his career. Roberts, a climate and energy reporter at Vox, believes the media is heading towards a more inclusive and accurate portrayal of climate change, although it has a long way to go. What was once an aggregate of “environmental journalism” has now developed into separate, established beats; for instance, climate and clean energy now have dedicated reporters. Compared to 15 years ago, there are fewer general “climate” pieces relegated to the science section and more reporting on how climate change affects multiple areas. Stories about climate are diversifying, and the people who are telling these stories are reflecting the diversity of the issue. Yet climate reporting has a long way to go. Every journalist, Roberts proposes, should be climate-aware and climate-informed. Climate change affects all topics, from real estate to migration to national security, and will only continue to do so, and with more urgency, into the future.

Roberts spoke at the Yale School of Forestry and Environmental Studies last week at an event sponsored by the Yale Environment Review and the Yale Center for Environmental Communication. The conversation was moderated by Anthony Leiserowitz, the director of the Yale Program on Climate Change Communication.  Roberts spoke about how climate change has traditionally been perceived by the public and how this narrative has been impeding our effectiveness to mobilize climate action. Climate change has commonly been labeled an “environmental problem,” and with this label comes a whole host of implications, including who is expected to care about it and how the media continues to portray it. People still don’t really know how to think about climate, Roberts says, and problems on a global scale, like climate change, need a systems thinking approach that is not often offered in popular media.

In reality, people won’t march in the streets for a carbon tax. It simply isn’t what excites (most) people. Rather, advocates should focus on what matters to people. Only when the climate crisis relates to what people care about - public investments, job creation, health care - will people be motivated to fight for meaningful climate action. Roberts seemed to be most passionate about the power of people to motivate and organize. He discussed political strategies that traditional politicians cling to, strategies that have often failed us in recent years.

The strategy he holds out hope for? The power of people. This strategy itself has two components: change the power dynamics of the system (for example, enact voting reforms) and get people in the streets to march for what they care about. If we are serious about climate action, people need to build up mechanisms of organizing and generate a grassroots army to advocate for social and environmental justice. And if those in power are serious about climate action, they need to recognize the power that these grassroots movements can have. Only then, Roberts seems to think, will we see the power shift necessary to build a real climate movement.

Check out the full video of the event here: https://youtu.be/9utGBVrgdHU