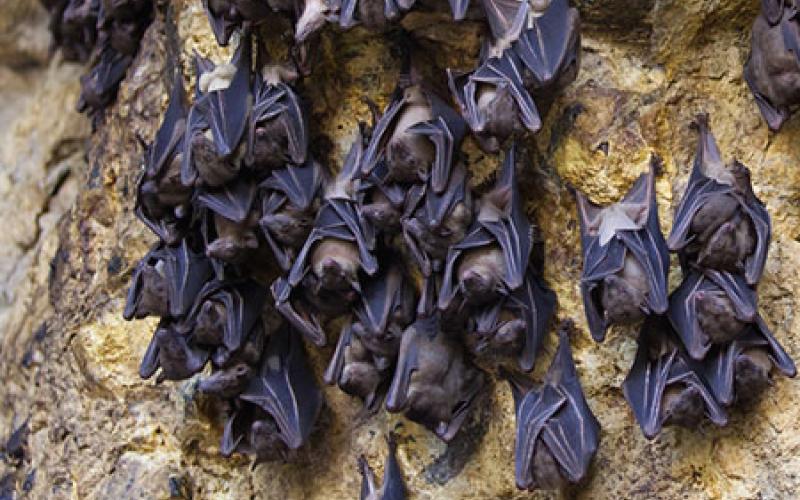 The monarch butterfly isn't nature's only migrator. Across most continents there are annual landscape-scale movements of massive numbers of insects. These migrations distribute resources across ecological corridors. For some predators, like bats that feed on migrating moths, migration time means fatty food delivery. One of these families of migrating moths is the Noctuidae, which, in the U.S., is an agricultural pest. It's also a main source of food for Brazilian free-tailed bats. The noctuid moths tend to cause heavy crop damage when they migrate into North America in the springtime. Each season, large groups of bats migrate from Mexico to follow the moths, often roosting and feasting together right in the middle of the moth's migration corridor. But how does weather alter the equation?

From 2010 to 2012, researchers at the University of Tennessee trekked to Texas to study bat-moth dynamics during the autumn migrations. They also tracked the low-pressure cold front systems that sweep from the north in the Great Plains to the South in autumn. These systems bring winds that sweep southward as well. The researchers used three traps at two different locations — one near a bat-colonized cave in Uvidae County, Texas and one 400 kilometers north — and caught a total of 63,654 corn earworm, fall armyworm, and cabbage looper moths. They also caught, weighed, and released 2,318 Brazilian free-tailed bats, and set up bat activity detectors at the cave entrance in Uvidae. The detectors recorded when the bats left at night to feed and when they returned near dawn. During each study interval, researchers kept close watch on the weather, documenting data like barometric pressure and wind.

The results confirmed that noctuid moths migrate with the weather — specifically with autumn cold fronts. More moths were always found at the traps when the cold fronts passed through, with one species arriving on the same day as the front's arrival while others followed one day or two days after. The body mass of the bats also seemed to respond to the weather: bat weight increased during cold front passages, and increased generally as the season progressed, especially for females. The research suggests that bats feasted on the moths brought in by northerly winds. Surprisingly, during these cold fronts, bat activity lasted longer into the night. Although a higher number of moths usually means that bats fill their bellies faster and return quickly to roost, researchers hypothesized that more migrating bats arrived on the same winds as the moths. As these migrators joined the local bats at the cave throughout the night, the bat detectors registered longer nights with ongoing activity.

Finding a predator-prey migration relationship that is so strongly tied to seasonal cold fronts highlights the ecological importance of weather. It also spells trouble for the future, when weather patterns will shift as the climate changes. Moths migrate as a response to wind and to extremes in temperature. Alter those parts of the weather system and both the bat predators and the moth prey may not adapt.

Right now, droughts in southern Texas are predicted to continue, which will mean fewer moths. Fewer moths could mean fewer bats gain enough body weight to migrate. If the bats overwinter in Texas, they might not find enough food locally to survive, since their food source, corn earworm moths, enter a hibernation period in late summer and are harder to locate then. If bats and moths are out of synch it means hard times for agriculturalists that rely on bats to keep down pest populations. As the effects of climate change increase, seemingly small movements, like these moths in the wind, may change the future of food and economic security.