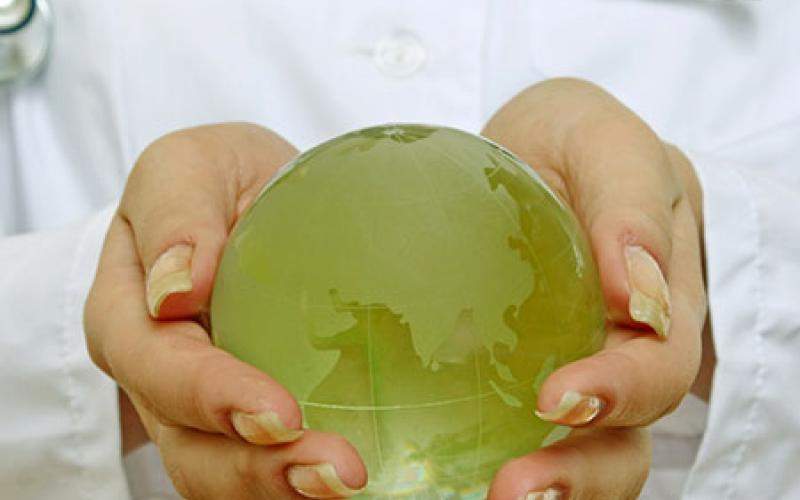 Climate change is often understood to be the main cause of or contributor to natural disasters like mega heat waves, wildfires, extreme droughts, and extreme flooding. It also helps spread disease. Warming trends and changes to weather patterns are enabling diseases to spread beyond their traditional borders. Recent outbreaks of Malaria, West Nile Virus, Rift Valley Fever, and Chikungunya were all made possible by expanding hospitable environments for the insects and animals that carry these diseases. In a recent study a team of science and medical professionals identified the role that global health plays in fighting climate change.

Writing in the Annals of Global Health, a team of seven experts from New York, Montreal, and Washington, D.C., examine the negative effects of climate change through the perspective of public health. The article, "Climate Change and Health: Transcending Silos to Find Solutions," also focuses on how climate change affects other disciplines and professions. The authors connect public health, ecology, national security, business, land, energy and water resources, social welfare, food security, and agriculture. They explain how each sector plays a role in causing and responding to climate change. The team used their collective expertise to analyze studies from the public health community and identify promising strategies to respond to climate change.

Climate change and changes to the natural environment each cause a ripple effect that affects the other. Meaning, for example, that while extreme weather events decrease the amount of land suitable for agriculture, one of the causes of climate change can be traced back to improper land management practices that resulted in loss of arable land. Environmental changes trigger chain reactions that touch every element of human life.

The article demonstrated this by explaining the causes and effects of violent conflict. Factors like income and location affect people's vulnerability to environmental threats. Low-lying regions are affected by sea-level rise more so than inland regions. Regions that normally have extreme weather patterns will suffer from more flooding and droughts. Low-income countries and people living in poverty suffer from limited access to food, water, and medical resources. All of these factors increase substantially the likelihood that a region will fall into civil and political conflict as people fight over resources. Either due to increasing civil strife or extreme weather events, more and more people are fleeing their homes. Every day, the area of land where  populations live shrinks, magnifying the effects and causes of violent conflicts.

Disease is yet another threat that vulnerable populations face. As previously mentioned, changes in weather patterns are changing the habitats for disease carriers. Outbreaks around the world are becoming larger and more extreme. This is magnified by the fact that many regions that are affected by these outbreaks have limited access to medical facilities. The 2015 Ebola outbreak was made worse by the lack of suitable hospitals in West Africa.

The authors suggest that, since climate change has multidisciplinary effects, it needs a multidisciplinary response. They also emphasize the need for prevention strategies, rather than adaptation — particularly for the sake of public health. Again, they point to the Ebola crisis as an example where prevention strategies would have been far better than the expensive and inefficient emergency response that took place. The authors point out a lack of collaboration within the scientific and medical communities, and stress the importance of cooperation within and across disciplines. Sharing data about climate change and health would pave the way for well-informed decision-making.

Education is necessary to incite such a revolution in the way experts think and work. The authors suggested expanding existing programs to include health professionals, particularly in the United Nations. The team also pointed to the new UN's Sustainable Development Goals as motivation and basis for collaboration. Finally, the authors cited financial losses resulting from climate change as incentives for businesses to get engaged — banks, insurance companies, and business executives will bear the financial burdens of climate change and public health crises.

Bringing together a wide range of expertise in public health, medicine, ecosystem science, policy, disease ecology and animal health, the team demonstrates how multidisciplinary teamwork can expand the depth and reach of analysis and decision making. Public health plays an important role in environmental management, and it is a role that still needs to be recognized. The interconnected nature of climate change creates an opportunity — and strong incentive — for experts of all fields to work together.