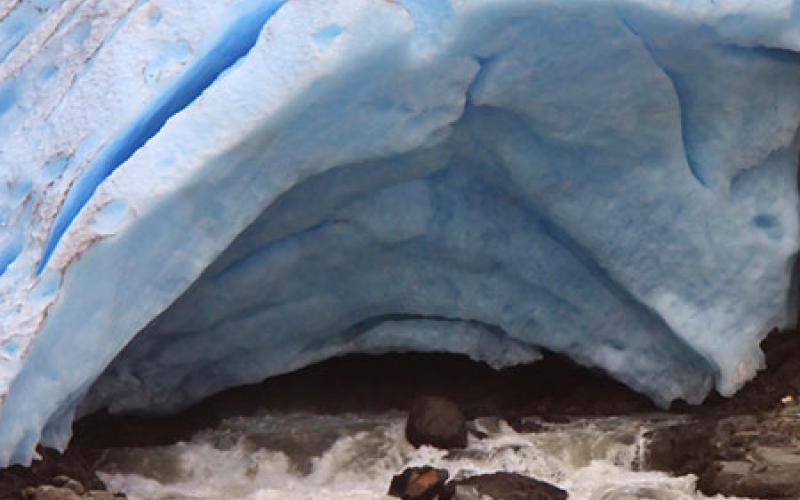 Mountain glaciers are significant water storage mechanisms, but they are rapidly declining in extent worldwide. A new study shows that in the Pacific Northwest, glaciers in British Columbia and Alberta are projected to decline by around 70 percent relative to their 2005 levels by 2100. Expanded simulations predict mountain glaciers in inland regions will be hardest hit, contributing to increased sea level rise and reduced water in many regions of Canada and downstream in the United States. Such decreases in banked water supply will greatly impact water quality and availability, as well as fisheries, tourism, recreation, and hydropower industries along the Columbia River.

In this study, Garry K. C. Clarke from the University of British Columbia and his colleagues use refined, high-resolution methods of measurement to understand not only the glaciers' rate of decline, but also the corresponding changes in ice thickness and extent over time. The resulting regional glaciation model, or RGM, provides additional information on how the melting ice will impact the surrounding region. The study incorporates historic and current land use and satellite data to track and project change from 1980 through 2100. In addition, the researchers run all of their prediction models for varying levels of global carbon emissions and resulting climate change/global warming levels.

Previous glacier studies predominately considered only rate of ice melt when forming predictions about glacial recession. This study adds predictions in the resulting trends in flow of melt water. Peak melt rates are predicted to occur between 2020 and 2040 for the glaciers in the Pacific Northwest. The corresponding peak outflow of melt water will create a surge in regional waterways, potentially increasing flooding and challenging fish migration and hydropower systems. This surge will be followed by slowing melt water that dwindles to a trickle over the following decades.

The Columbia River, which flows from Canada into the U.S. and is the largest river the Pacific Northwest, will experience increased flow rates followed by a dramatic decrease after peak melt. The effect will be most pronounced in the headwaters region where glacier melt currently accounts for more than 3 percent of the annual flow. This research points out that this could threaten the significant hydropower along the river in addition to the recreation and natural resource benefits of the iconic river and its surrounding ecosystems.

Impacts from global warming threaten to change the planet in ways that are significant, but they are still uncertain. This study highlights changes that will impact a large, resource-rich region, and the urban areas downstream. Not only will water flow rates be unsteady, but water supplies for the future are threatened. Understanding the scope of these glacial changes will enable the region to adapt to a changing future.