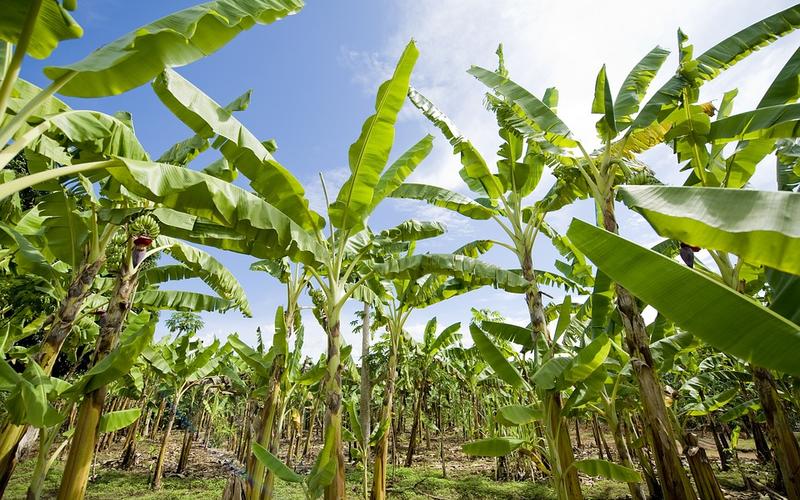 As we approach the middle of the twenty-first century, discussions in almost every sector are touching on the Earth’s shifting climate. Warming temperatures, changing rain patterns and rising oceans will directly or indirectly affect most systems that we rely on. Bananas are a vital player in the world’s food system, and they will also be affected by a changing climate.

Food production is one sector that is of increasing concern in a rapidly warming world. As growing conditions in agriculturally important areas shift, the world’s food supply is at risk. While some plants will see benefits from warmer global temperatures, there is an upper limit to this growth of production. Above a certain point, growth will decline as temperatures approach levels that are too warm to survive.

Countries around the world are considering ways to ensure that food supplies will meet current and projected population demands. This concept of food security, however, is only one facet of the food production system. Nutritional security, a concept that focuses on diet variety, is also raising concerns worldwide. Nutritional security focuses on the diversity of food available and whether populations have access to essential nutrients in their daily diets – and if they will continue to have this access in the future.

Until this point, much of the research related to food and nutritional security and climate change has focused on grains. ﻿Dr. Varun Varma and Dr. Daniel Bebber at the ﻿University of Exeter in the United Kingdom recently turned their attention to another important world crop: bananas.

Bananas are one of the most important food crops worldwide both economically and nutritionally. They are generally grown in tropical and sub-tropical regions and can be a significant staple of the local diets in these countries. Despite bananas being a tropical fruit, they are ubiquitous across the globe. This is because banana-producing countries are also massive exporters of bananas, and this contributes to nutritional diversification in an affordable manner. In this way, bananas contribute significantly to the local and global food economy and supplement otherwise grain-heavy diets.

As the climate has warmed, banana production has increased. This increase may not be a sustainable if temperatures continue to warm, however. The rate of increase is projected to level off in the coming decades as temperatures reach the upper limits of banana suitability.

The significance of shifts to banana production to the global diet and economy could bring bananas into the climate change conversation. Varma and Bebber highlighted the importance of managing bananas for maximum adaptability to a wide range of potential climate impacts. Varma and Bebber also suggest that the global export market may need to be reorganized to meet future demand. This brief study should spur further important considerations for maintaining banana production in an uncertain future. Consumers, farmers, and food scientists will benefit from understanding that the ubiquitously available banana is actually an important player in providing nutritionally diversity to the global population.