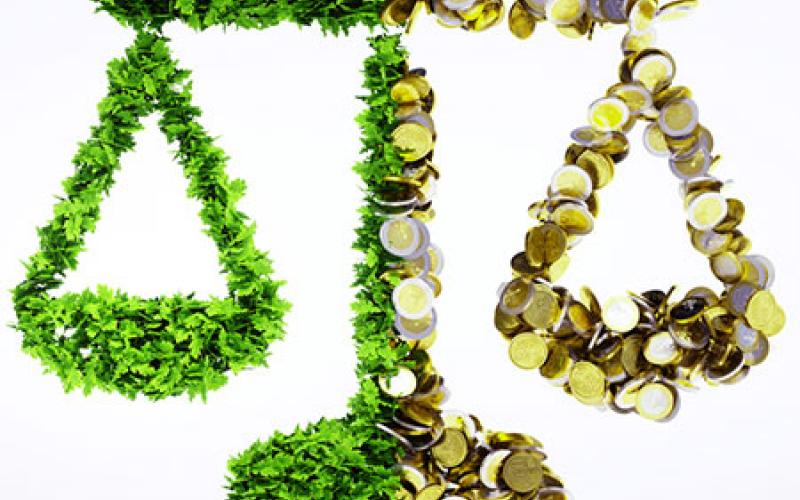 Conversation about environmental policy often includes debates about potential impacts to business, economy, and investments. Some argue that the costs necessary to comply with strict regulations are prohibitive and unrealistic — you can't simply rearrange the entire energy grid because you want to be environmentally friendly. Others claim that we can't ignore the inevitability of eventually switching to renewable sources — nonrenewable energy will not sustain society indefinitely. Economists in the European Union have finished a study that put real numbers into this debate. They created models that predicted climate change policies having positive impacts on employment and GDP.


The results of this study, conducted by experts from Cambridge Econometrics and the Directorate General for Climate Action of the European Commission, were published in the September 2015 issue of Earthscan's Climate Policy Journal. The authors presented three scenarios for how climate policies could impact the economy. Each scenario was developed by combining a macroeconomic model with an energy systems analysis. The authors developed a baseline scenario, also considered "business as usual," that included only the policies that have already been adopted. Scenario one represented a 40-percent reduction of emissions by 2030 (based on 1990 levels). Scenario two includes additional strict energy efficiency policies and a target of 30 percent energy consumption from renewable sources. Scenarios one and two are also referred to as the decarbonization scenarios in the original report as well as in this summary.
In the baseline scenario — meeting the 40-percent emissions reduction target by 2030 — the model forecasted a sevenfold increase in carbon prices and about two million fewer jobs between 2020 and 2030. The anticipated decline in employment is because Europe is forecasting a decrease in working age populations after 2020. This decline in employment was diminished in both of the decarbonization scenarios. The first projected 678,000 more jobs than the baseline by 2030, and the second projected 1.2 million more jobs.

Carbon prices are projected to increase in all three scenarios, but the difference between these projections for the decarbonized scenarios is substantial. Scenario one predicts an eightfold increase in carbon prices. However carbon prices are expected to only slightly more than double in the second scenario. The increases in carbon prices in all three models are a result of some form of carbon pricing – via the EU's cap-and-trade style system, called the Emissions Trading Scheme (ETS), or through taxes for sectors not participating in the ETS. It is worth noting that the authors suggest that taxing carbon in non-ETS participating sectors was likely politically impractical. The lower projected carbon fees in scenario two are a result of energy efficiency measures and targets for renewable energy consumption. These policies would lead to reduced emissions and lower fuel demand, which would offset the need to raise carbon prices.
The carbon pricing schemes used for these models are revenue neutral. This means that the revenue from the taxes or permit fees is circulated back to households. There are a couple of ways this is done — either by distributing revenue to citizens as payments, or using the revenue to offset other taxes, such as income tax. The authors found that the method used to return the revenue to citizens had significant impacts on the overall effectiveness of each scenario. While scenario two came out ahead in many aspects throughout this study, the authors found that switching the method of returning revenue flips the desirability of the two decarbonized scenarios with regards to net employment benefits. The preferred method was distributing the revenue to citizens via payments. However when they modeled the effects of using the revenue to offset labor taxes, the employment figures switched — results for scenario one were higher than scenario two.
The method used in this study for carbon pricing is similar to efforts in the United States to put a price on carbon. Senators Sheldon and Schatz introduced a bill in November 2014 that would have applied a carbon pricing scheme very similar to the one used in this study. Other organizations have been lobbying the United States government to adopt such a carbon pricing plan. The results from this study can provide evidence to support these efforts.
Overall, the authors believe that these results are promising for the future of climate policy, job growth, and the economy. By taking on more aggressive renewable energy policies, employment levels will actually be higher. This may come as a surprise to many people, considering the levels of investment necessary and retraining requirements. However, from a different perspective, investing in the technologies that will take society into the next era will create unique opportunities for expanded and possibly more lucrative investments.
Read more regarding:
Climate Change & Energy
Policy & Business
Christina Stone