Sugar maples have a sweet tooth for nitrogen 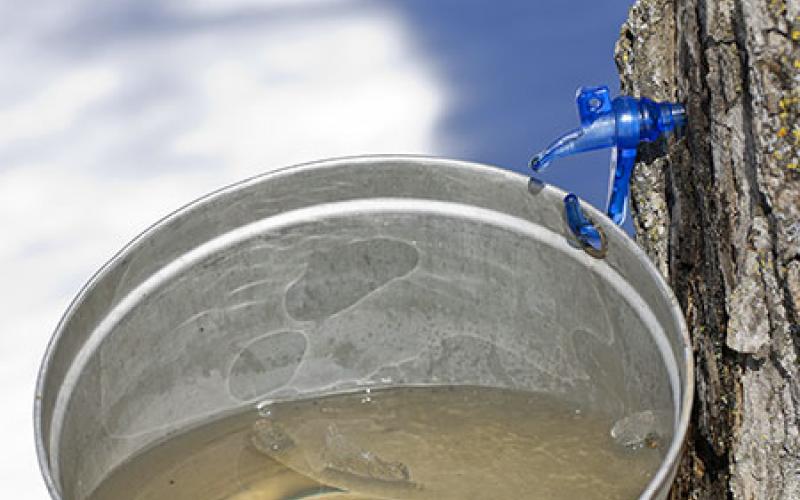 By Puffin's Pictures via Shutterstock

Other than timber, maple sugar is the most important forest product in the northeastern United States. It is collected from maple trees in late winter and boiled down from watery sap to concentrated syrup or sugar. The initial concentration of sugar in the sap determines the amount of maple syrup that can be produced. For decades, maple sugar producers have desired to increase sap sweetness to increase yields and decrease time and energy spent on production. Until now there has been limited information on which nutrients in the soil are important to maple sap sweetness.
A recent study conducted by Adam Wild and Dr. Ruth Yanai of the State University of New York College of Environmental Science and Forestry identified the key soil nutrients that influence sap sweetness. The study was carried out in the White Mountains of New Hampshire where a significant portion of maple sugar is produced. The findings were published in the journal Forest Ecology and Management.
The researchers looked at the response of sap sweetness to soil nutrient additions. These effects were also assessed through several tree characteristics such as leaf nutrients, photosynthesis rate, and stomatal conductance, or the measure of gas exchange (including carbon dioxide) and water loss through the leaf stomata. Trees that received nitrogen additions were the only trees to show a significant increase in sap sweetness. The researchers tested the possibility of using tree characteristics, such as tree canopy health, to help maple sugar producers visually identify trees with sweeter sap. Nonetheless, the experiment did not find any visual tree characteristics that signified increased sap sweetness.
The authors believe the secrete ingredient for sweeter sap is nitrogen because it is often a limiting resource in nature. When high levels of nitrogen are available to trees, the trees photosynthesize more and produce sweeter sap. The results of this study were quite unexpected for a few reasons. First, nitrogen increased sap sweetness when it was used alone and trees receiving both nitrogen and phosphorus additions showed no increase in sap sweetness. Typically, productivity increases when both nitrogen and phosphorus are in high supply. Second, key nutrients that are thought to be important to maple trees, especially calcium, showed no influence on sap sweetness.
Adding nitrogen to soil around maple trees may be a plausible route to increasing maple sugar yields. However, applying a large amount of nitrogen in the soil has historically led to negative effects in watersheds and downstream ecosystems. Maple sugar producers looking to add a new stand of trees for production should consider selecting sites that are naturally higher in nitrogen or tapping into more trees. It is estimated that there are around 2.2 billion maple trees in the U.S. but only 9.3 million of them are currently used to produce maple sugar. It may be economically advantageous for maple sugar producers to use nitrogen fertilizers before tapping into new maple trees. The potential negative impacts on other parts of the ecosystem, however, should be considered in management plans.
To many sugar lovers, maple syrup will always be a favorite treat. Perhaps with a deeper understanding of the environment that produces maple syrup, aficionados will have a greater appreciation for this sweet treat.  Maple sugar is the most important non-timber forest product in the northeastern U.S. A new study shows greater amounts of nitrogen in the soil can lead to sweeter sap and therefore higher maple sugar yields.
Read more regarding:
Policy & Business
Forests
Land Management & Land Use
Jessica Swindon