Shared solar: The next big thing in renewable energy 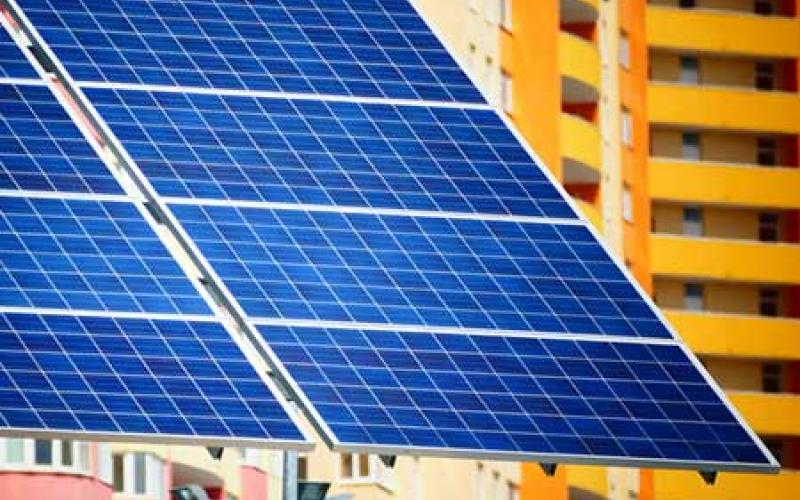 Solar energy’s annual installed capacity grew more than 100 times between 2004 and 2014, most of which took place in the residential and commercial sectors. Four reasons account for this unprecedented increase: costs of solar systems have dropped; energy storage technologies have improved; customer awareness and demand for clean energy have risen; and government incentives for solar projects have increased. However, solar still represents less than a half-percent of U.S. electricity generation.  Also, less than a half-percent of U.S. households have solar panels installed on their rooftops. Key barriers to solar development are technical and economical. Community shared solar is a powerful solution to overcome those barriers.
Community solar refers to systems that provide power and financial benefits to community members. An analogy of community solar would be a “solar garden,” where a large number of solar arrays are installed in the middle of a field, feeding electricity back to the grid.  In a recent article published in The Electricity Journal, Paul Augustine and his team at West Monroe Partners, a Chicago-based business consultancy, set out to characterize the current state of community shared solar in the U.S. and explore ways to overcome challenges that limit its growth. They surveyed 15 different utilities to gather data about past and currently planned community solar projects.  Three main themes arose from the survey.
First, community shared solar offers benefits to all three groups of its stakeholders: energy system developers, utilities, and customers. Shared solar offers the major benefit of solving the issue of inadequate roof space.  An estimated 49 percent of U.S. households are unable to host solar panels either because residents do not own their building or live in multifamily housing, or because the structures have insufficient roof space. Community shared solar provides access to all customers.
Shared solar also provides benefits to solar developers and utilities. Developers can benefit by taking advantage of the available tax credits for solar installation. Utilities can use shared solar projects to meet their state-mandated renewable energy portfolios. Furthermore, shared solar presents opportunities for fairer renewable energy access. Several programs have been created to involve low- and moderate-income customers. Despite these developments, public and private investors still need to design innovative financial mechanisms to scale up community solar projects.
Second, the researchers found that the lack of experience in project design is a noteworthy barrier for shared solar. Since shared solar is still a novel concept, most stakeholders lack experience with project planning that promotes solar. So far, municipalities and cooperatives have been more willing to take on the risk of building-shared solar systems, while other investors await a clearer regulatory environment. Government agencies have not yet enacted enough enabling policies to spur the advance of shared solar.
Third, the researchers found that the most significant barrier to community solar was the lack of regulatory clarity. For example, rules for net metering — in which solar customers can sell excess electricity produced by their panels back to the grid — vary state by state. If used, net metering provides a strong incentive for customers to purchase solar panels or participate in shared solar projects. On the other hand, utilities usually oppose net metering regulations since such mechanisms often cuts into utilities’ revenue streams. The controversy around net metering has led to drastically different solar regulations from one state to another. Additionally, stakeholders are also uncertain about the amount of tax credit they could receive from the federal government after their solar installations.
Community shared solar has great potential for growth in the U.S. However, to meet the needs of the developers, utilities and customers, smarter policies and financing schemes are needed. The industry must share best practices for effective project design and prioritize consumer education. Most importantly, government agencies will need to reduce uncertainties regarding tax incentives and increase regulatory clarity to encourage key market player such as private investors, utilities and energy developers to enter the shared solar market.
Read more regarding:
Policy & Business
Industrial Ecology & Urban Planning
Climate Change & Energy
Krisztina Pjeczka