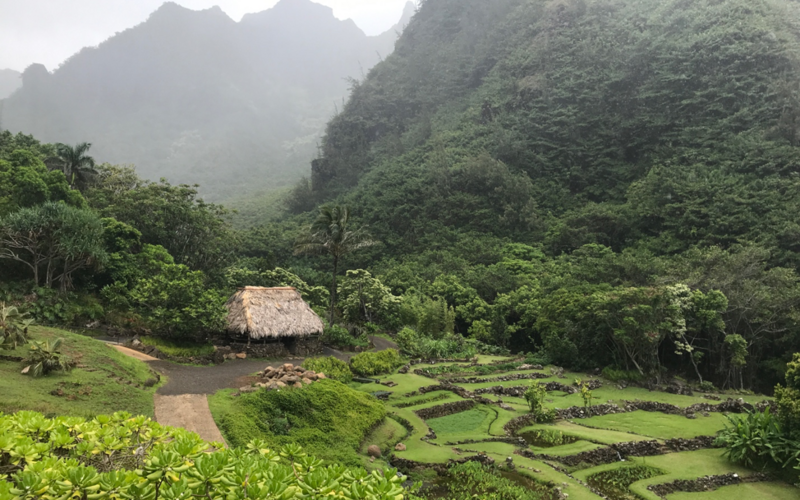 In March of 2019, the United Nations made a declaration: the next decade, between 2021 and 2030, will be a time of massive ecosystem restoration. To match this bold statement, global food production is currently under the microscope. For decades, scientists have investigated how to feed the world’s growing population. They have also debated whether local farming practices can feed population growth, especially in this age of climate change and habitat loss. A recent study in Hawai’i aims to answer just that – how to feed the islands’ population when 87 percent of food is imported – and comes up with remarkable findings.

The first study of its kind in Hawai’i, this research analyzes the potential for indigenous agriculture to feed Hawai’i’s population in a changed climate. In particular, the study mapped the locations of native agricultural systems before colonization, approximated how much food those systems produced, and estimated what their future production potential may be.

In this study, published in Nature Sustainability, Dr. Natalie Kurashima and her colleagues examine the potential food productivity of Hawai’i’s farmland. In Hawaiʻi, 42 percent of agricultural land is currently unfarmed, and the vast majority of land that is farmed produces crops for export. This conventional system is at odds with native Hawaiian land rights and use.

At the heart of traditional Hawaiian agriculture are three types of farming systems: irrigated pond fields known as lo’i, dryland agriculture, and the rainfed agroforestry systems of deep, forested valleys. Examining eight of Hawai’i’s major islands, researchers used environmental, climatic, and historical data to map and validate the distribution of these three systems before the beginning of Western colonization with the 1777 arrival of Captain Cook. They also assessed current land use and calculated the productivity of native agriculture under three future climate scenarios involving changes in rainfall and temperature.

Astonishingly, the study concluded that 6 percent of Hawai’i’s land could have produced more than 1 million metric tons of food to feed the 1.2 million native Hawaiians living on the islands before 1777 and feed 86 percent of the islands’ population today. Further, the researchers found that pre-colonial food production is comparable to today’s consumption in Hawai’i. In contrast, current active crop and pasture land covers 3 times more land than before 1777 and only produces 151,700 metric tons of food through conventional farming methods. This is a fraction of what native Hawaiians were likely producing in the past, according to the study. The researchers also identified areas likely to sustainably produce food under the range of climate scenarios.

These findings suggest that Hawai’i can implement native farming practices to provide food security and build resistance to climate change. A successful shift to sustainable agriculture in Hawai’i would provide lessons for societies worldwide. Kurashima and her colleagues’ work is an exciting example of the possibility of native agriculture to provide food security during climate change – as long as there is the political and social will to promote and respect native practices and peoples.