Opening Pandora’s Box: Deforestation and Development on the Island of Borneo 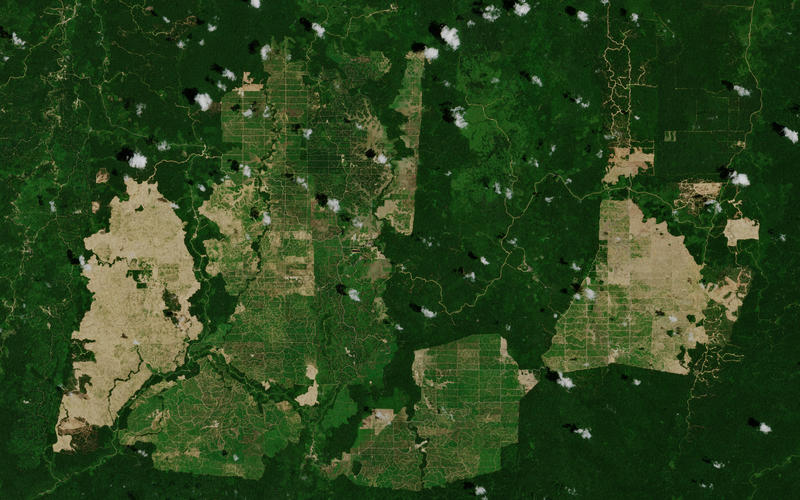 In ancient Greek mythology, Pandora was given a box by the gods. She was told not to open it, but curiosity won out and she took a peek. Instead of the gifts she’d expected, the box was full of nasty surprises, and by opening it Pandora inadvertently unleashed its contents onto the world. Suddenly, humanity was saddled with crime and disease.

Pandora’s story is well known. But when a team of scientists from John Cook University in Australia invoked the Greek myth earlier this year, in a paper published in Science, they didn’t do so lightly. The scientists’ somber analysis was triggered by an initiative on the island of Borneo to transform its impenetrable forests into a traversable patchwork of roads and railways.

This study is the latest bad news for Borneo’s biodiversity. A spate of recent, high-profile scientific papers suggest that Borneo is heading down a disturbing road. In 2016, Indonesian researchers uncovered the extent of old-growth forest converted to palm oil plantations over the last 40 years. Then in 2017, scientists in Japan linked this decrease in forest cover to shifting precipitation patterns. The fear—increasingly substantiated by science—is that development may push the island over a tipping point, spelling the end of unified rainforest habitat in Borneo.

Borneo is the world’s third-largest island and a mecca for plant and animal diversity. Its many ecosystems are home to some of the world’s most iconic species, such as orangutans, elephants, rhinoceros, sun bears, and clouded leopards, all of which are threatened with extinction. National borders split the island between three governments: Indonesia controls 73% of the island in the south; Malaysia has 26% in the north; and, tucked up on the northern coast is the nation of Brunei with the final 1%.

For decades, Borneo has been clearing its forests, and the pace of clearing is accelerating. Much of this is to facilitate the production of palm oil, a cheap vegetable oil found in many everyday products, from processed foods to cosmetics to cleaning products. According to the nonprofit Rainforest Rescue, palm oil can be found in half of all supermarket products and palm oil plantations currently cover nearly 105 thousand square miles of the earth’s surface, an area larger than the UK. The warm, humid climate of the tropics are perfect for growing palms, which provide a reliable source of income for both large global corporations and small farms.

Indonesia produces more palm oil than any other nation—exporting nearly 42 million metric tons in 2018—and production has grown at an average annual rate of 7.4% since 2010. With its neighbor on the island, Malaysia, the two countries account for 90% of palm oil production worldwide.

While international environmental organizations have identified palm oil plantations as the primary driver of old-growth deforestation in Borneo, industry representatives and the Indonesian government dispute this claim. In 2014, Indonesia’s Minister of Agriculture denied that any forests were being cleared, saying that only unforested lands were being used to grow palms despite evidence to the contrary.

Viewed in a certain light, the government’s hesitance to acknowledge this deforestation makes sense: the palm oil sector employs over 4 million people in Indonesia and Malaysia. In fact, when palm is planted on degraded or abandoned lands, it often has the potential to contribute more to economic and human welfare than any comparable use of land. In part due to the positive socioeconomic role of palm oil, data on land clearing for plantations is both sparse and contested.

The full extent of forest clearing wasn’t revealed until 2016, when David Gaveau and his colleagues at the Center for International Forestry Research in Indonesia published a paper documenting forest conversion to palm oil plantations between 1973 and 2015. Using satellite data, the team looked at all palm plantations created during those four decades and came up with a system to distinguish between intentionally cleared forests for palms and those where palms were planted on lands cleared for another reason.

They documented a troubling trend. From 1973 to 2015, over 70 thousand square miles of old-growth forest were cleared and industrial palm oil plantations expanded over half that area. Imaging revealed that 77% of palm oil plantations in 2015 were old growth forest in 1973. The data indicated that despite government claims, the motivation behind one quarter of all deforestation on the island since 1973 was to clear land for palm oil.

Alarmingly, Borneo’s rate of deforestation shows no signs of slowing. In fact, in recent years the rate of deforestation in Indonesia shot up to the highest in the world, overtaking Brazil, with nearly 8,500 square miles deforested between 2011 and 2012. The year Indonesia took this inauspicious title was perhaps no coincidence: 2011 was when Indonesia began to implement a new national development initiative—the Indonesian Master Plan for the Acceleration and Expansion of Economic Development (MP3EI)—in earnest.

The backbone of MP3EI is an infrastructure plan that will see new roads and railways constructed across the island. These roads won’t just circumnavigate Borneo; many will cut directly through what was formerly contiguous rainforest.

Historically, the island’s dense, foreboding forests have served as an impediment to development but a boon to its biodiversity. Cities and settlements have been relegated to the coast, while the vast interior—boasting an area of rainforest 50 times larger than Yellowstone National Park—was left intact. But new roadways, which will in part help facilitate the shipment of commodities such as palm oil across the country, will change this by posing a double threat.

First, roadways will make it easier to access the interior of the Borneo forest, where—following a trend at least four decades old—companies and farmers begin clearing the forest for timber and establishing new palm oil plantations. Second, the roads themselves represent a serious ecological threat. By breaking up the forest into small, disconnected parcels, roads will affect the natural movement of many of the island’s endemic species. Examining the proposed infrastructure, the scientists at James Cook University found that the completion of all road construction would reduce connected wildlife habitat in Indonesian Borneo from 89% to 55%.

Mohammed Alamgir, the lead author of the study, reacted strongly and publicly to his own findings in a meeting with the press, calling these infrastructure projects “daggers in the heart of the Borneo rainforest,” and imploring the Indonesian government to “reconsider them, because they’ll open a Pandora’s box of crises for the world’s biologically richest forests.” With new, traversable roads crisscrossing the island, it is more than likely that the rate of deforestation will continue to climb, possibly faster than ever.

As development projects continue to whittle away at the old- and second-growth rainforests of Borneo, a much graver threat to the island could be looming on the horizon. This threat is tied to one of the most fascinating qualities of rainforest systems: the trees make their own rain.

By pulling water out of the soil, evaporating it through their leaves and sending it back into the atmosphere, rainforests create their own clouds, which in turn generate the rain that sustains the forest system. Deforestation can have the opposite effect: fewer trees and a higher albedo—the amount of sunlight reflected by the earth’s surface—means that less water cycles through the system.

Researchers at the Institute of Space-Earth Environmental Research in Japan took this framework and considered what effects widespread deforestation might be having on Borneo’s water cycle. Their study was motivated in part by data showing that the island’s precipitation decreased by nearly 27% between 1951 and 2007. Using models to simulate further changes, the scientists found that depending on where deforestation occurs, it could decrease or increase precipitation on the local scale.

This might sound like no net change, but in a tropical rainforest system even a slight shift in precipitation can affect the health of plant species that have come to rely on specific climate conditions. And if the overall trend continues, with precipitation continuing to decline, Borneo’s forests, as well as the species that depend on them for survival, may be beyond saving.

The threats facing Borneo’s forests are grave. The situation is made even more dire considering what’s at stake: some of the most unique plant and animal biodiversity on the planet. In 2016, International Animal Rescue (IAR), a conservation charity with offices in Borneo, announced that orangutans will be completely extinct in the wild within 10 years, with populations of the Bornean orangutan falling 60% between 1950 and 2010. And while orangutans are a visible example of Borneo’s ecological crisis, the fallout runs much deeper.

On a list of countries ranked by the number of native species at risk of extinction, compiled by the International Union for the Conservation of Nature, Indonesia ranks third, with over 1,200 species on the precipice.

As its biodiversity is under threat, Borneo’s fate is deeply entangled with greater global forces such as climate change and international trade. It’s salvation then will only come from a unified effort, and for Borneo that can’t come soon enough.