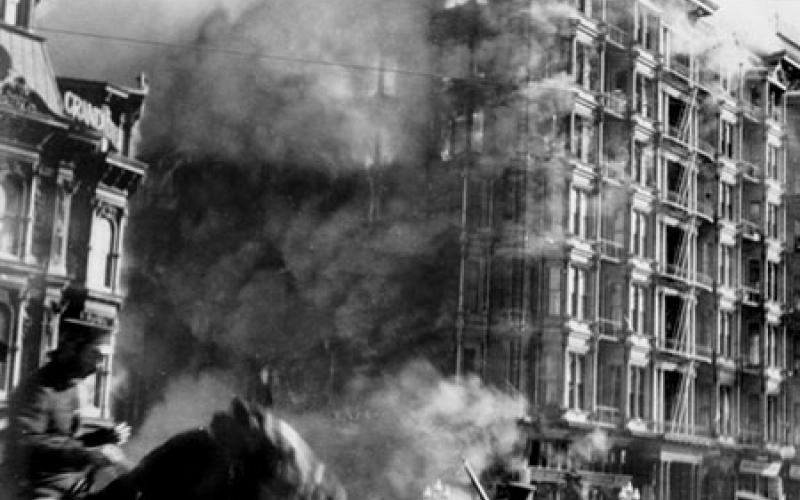 In 1906, a massive fire destroyed more than 28,000 buildings in San Francisco after the largest earthquake in the city's history. The fire alone accounted for more than 80 percent of total property damage from the disaster. Fortunately, most of those damages were insured and the capital market in San Francisco was strong enough to finance the city's reconstruction. The redevelopment effort significantly altered the structure of the city. Developers introduced denser housing in areas laid bare by fire than areas untouched by the disaster. Such difference in the density of residential buildings represents the legacy of a local disaster on the land use pattern in urban areas.

In a recent study in the Journal of Urban Economics, Professor James Siodla from Colby College demonstrated the short-term and long-term impacts of the 1906 Fire on San Francisco's land use pattern. Using the disaster as a natural experiment, Siodla compared pre- and post-disaster development across razed and unburned areas in the city, with two questions in mind. First, given the growing demand for housing in San Francisco, what role did durable buildings play in delaying redevelopment? Second, do exogenous shocks that affect the timing of redevelopment have long-lasting impacts?

The study includes two sets of samples: (1) a restricted sample that only includes blocks in three neighborhoods and (2) a full sample that includes blocks in all seven neighborhoods along the fire's boundary. In the full sample, the razed blocks were much denser than the unburned block even before the Fire. One suspected reason is that redevelopment options were available to the razed blocks that were not yet available to the unburned blocks. This pre-existing difference in residential density can confound the difference in residential density measured after the fire, which brought denser housing development in the razed areas. Therefore, the full sample is subject to bias. The restricted sample, however, does not carry such pre-existing differences and is thus more reliable for analysis.

In the restricted sample, the study shows that the gap between razed and unburned areas in residential density arose upon redevelopment and continues into the 21st century. However, in the full sample, which includes many more neighborhoods, the gap decreases. The study attributes this closing of the residential density gap to the large-scale initiatives implemented by San Francisco, such as the Mission Bay project, which seeks to redevelop old railway yards for residential, commercial, and mixed uses.

This study sheds light on how the 1906 earthquake and fire removed the friction against redevelopment in parts of San Francisco and has since left a legacy of higher residential density in the razed areas of the city. From another perspective, the disaster stands as a stark contrast to the burdensome policies and regulations that increase redevelopment costs and deter land use change. Ultimately, a disaster of such scale can serve not only as a reminder of the tremendous loss brought to urban areas, but also as a laboratory that illustrates the catalysts and inhibitors of urban land use patterns.