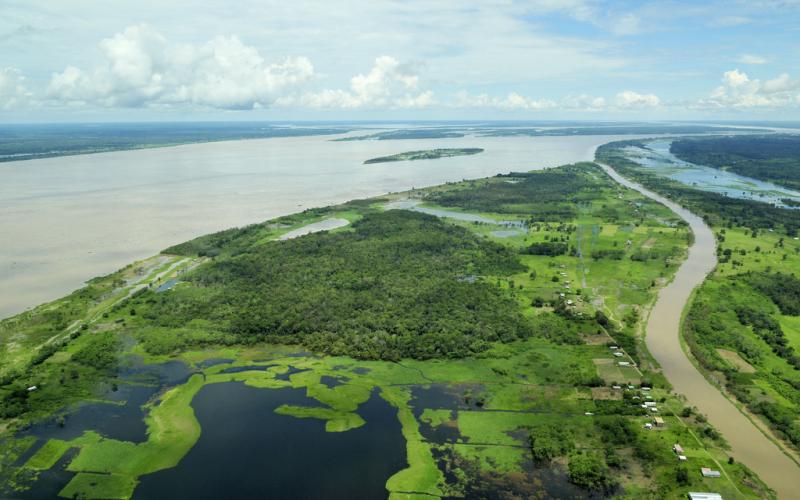 Neil Palmer (CIAT). Aerial view of the Amazon Rainforest, near Manaus, the capital of the Brazilian state of Amazonas.

The smoke can hang so heavy so often over Jakarta, that children wear gas masks with cartoon figures to breath safely on their way to school. This smoke, caused by the burning of forests to make way for palm plantations, is different than the smoke in Brazil that comes from burning forests to create room for cattle ranching. Because of varying land use practices, the causes of deforestation are different around the globe. Recently, however, scientists have discovered that fragmentation patterns – the breaking of large pieces of forest into smaller pieces through practices like burning – are remarkably similar on a continental scale.

A recent publication in Nature by Franziska Taubert et. al shows the number of forest fragments around the world increasing, with the size of each one of those fragments decreasing. This means less biodiversity, and quicker. Think of a large chunk of ice in a cup of soda. If broken up into smaller pieces, it will melt faster. So too with our forests; the patterns look the same in tropical forests everywhere. Assisted by in-depth mapping, Taubert’s team was able to predict that additional forest loss will lead to a dramatic increase in the total number of fragments in tropical areas. As such, forest fragmentation is reaching a critical point in abundance and scale.

Taubert and her team framed the issue of forest fragmentation through what is known as “percolation theory”. Percolation theory focuses on clustering in disordered systems, or patterns in a seemingly disorganized system, and what those clusters mean. Through a complicated series of mathematical relationships that analyze these clusters, the scientists look for “fingerprints” that explain the hidden dynamics of a system. The fingerprints that Taubert and her team found in their analysis lead them to believe that “small additional amounts of forest loss in the near future would lead to a strong increase in the number of forest fragments.”  If that is hard to visualize, think back to that ice cube in your drink on a hot summer day. In the case of fragmentation, there are more pieces of ice in your drink and they are melting faster than ever before.

To apply percolation theory to their study, the authors paired advanced high-resolution maps and a clustering algorithm to show us exactly how many fragments there are across Asia and South America. These are the places where the most deforestation and fragmentation occurs, home to more than 130 million pieces. Out of what appears to the untrained eye to be a chaotic sequence of forests, they created order by establishing fragmentation models. Before this type of work, fragmentation was insidiously hard to estimate because it was hard to see, for lack of a better term, the forest from the trees.

The similarity in fragmenting across continents is surprising. One would expect for there to be a major difference, given the lack of similarity in land use practices between places. With this knowledge, the authors predict that additional forest loss will result in a dramatic increase in the total number of forest fragments over the next fifty years. Some estimates project a factor of 33-fold by the year 2050.

The smoke doesn’t have to hang so heavy, and the metaphorical ice cube in our soda doesn’t have to melt. Given the economic incentive to clear forests for palm plantations and other agricultural products, we might not be able to stop fragmentation from occurring. However, at the suggestion of the author, sound reforestation and forest protection plans can mitigate the damage.