Forest regrowth as a counterbalance to climate variability 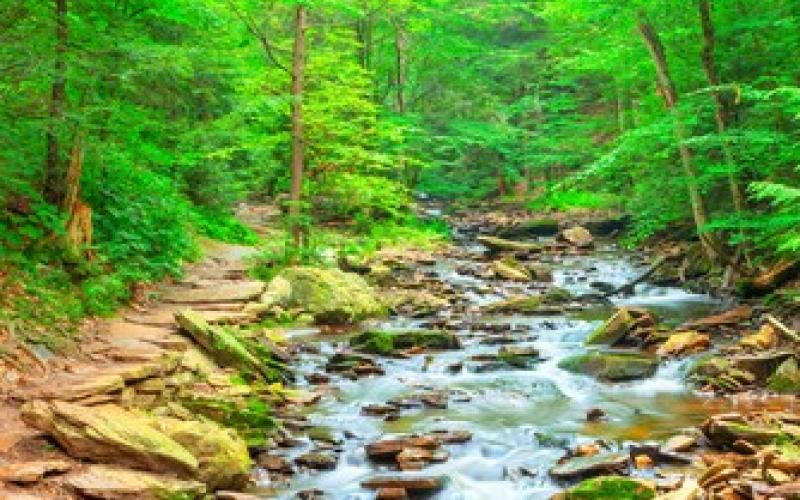 Agricultural land uses in the Southeast United States peaked in the early 20th century, giving way to a slow regeneration of successional forests, particularly in the Piedmont of North Carolina. Concurrently, parts of the region experienced changes in seasonal and total precipitation. Stream flow patterns, however, did not change accordingly. In fact, the flows in the reforested watersheds have been decreasing despite similar or increased precipitation. What might explain this discrepancy and what are the implications for the downstream users and other similar watersheds?

A study team from the University of North Carolina set out to determine if the land use/land cover (LULC) change over the last century explained the changes in stream discharge. Comparing measures of meteorological and hydrologic drought, the Palmer Drought Severity Index (PDSI) and the Palmer Hydrologic Drought Index (PHDI), yielded inconsistencies in drought occurrence, suggesting a non-climatic source of the change in discharge. Using aerial photograph-derived land cover from 1955 and present LULC data, the team compared the changes in the in Flat and Eno River basins and the long term forested Linville River basin on the basis of recorded precipitation and discharge, as well as modeled values. The researchers used the Soil and Water Assessment Tool to estimate flows given consistent 1955 LULC and compared these modeled results to actual collected data. The study was recently published in the Journal of the American Water Resources Association.

The results paint a picture of the gradual regeneration of forest cover on abandoned agricultural land coinciding with a gradual decrease in stream discharge. The general trend in the reforested areas was an increase in groundwater recharge and evapotranspiration. According to Soil and Water Assessment Tool simulations, these conditions lead to a decrease in surface runoff. This pattern was most obvious in low flow periods and in the growth periods of vegetation, owing to the more transmissive soil structure in forests as compared to the compacted soils of agricultural land. The impact of forest cover is less acute in high precipitation periods as more water runs off, and discharges are relatively more similar as compared to the previous land cover regime.

The management implications of LULC changes and the effects on discharge are several. Reductions in base flows, particularly in the headwater basins of urban areas, can lead to lower useful water yields downstream, impacting municipal and industrial users. Increases in forest cover, however, lead to reduced flood peaks and flash flooding as the landscape is able to absorb more precipitation more quickly than an agricultural system can. If inter-annual variability continues to increase and the same amount of precipitation falls over fewer events, this could be a significant benefit. In addition, the increased contributions to groundwater stores create a longer term and more stable reservoir than surface flows, providing options in times of drought. Other considerations may include improvements in water quality due to vegetation increases and greater natural filtering.  The economic value in the new forest cover may not be as explicit as agriculture, but the increase in landscape resilience, flood attenuation and water filtration, groundwater recharge, and biodiversity are important additions to the ecosystem. The return of forest where primeval stands once stood is a positive, and balancing the emergent assets in tandem with the existing demands on the system will be a key consideration in both the study basins and across the region.