Forest fungi and their implications for a warming planet 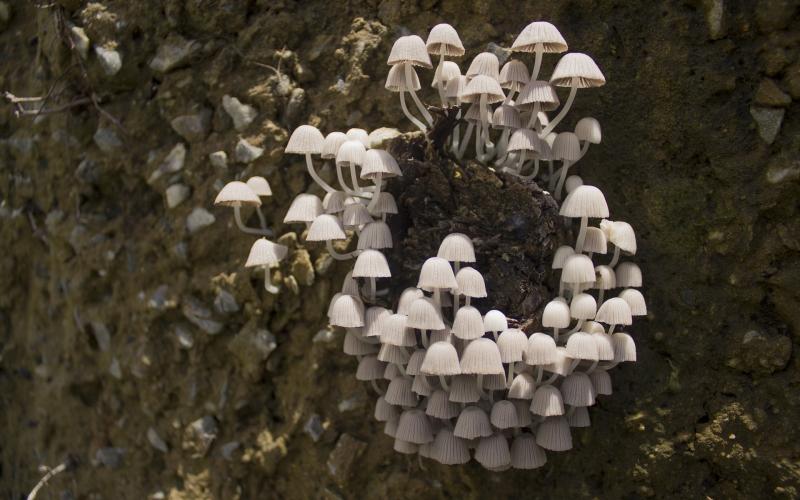 Fungi live in their own world of war and peace, their competition unknowingly playing a major role in global climate change. Perhaps, when you think about fungi you think about mushrooms; this fruiting body of a fungi is produced as a means of reproduction, much like an orange to an orange tree. We have our favorite varieties, such as crimini, shitake, and portabella that make a tasty accompaniment to your salad or pasta. We might also think of yeast, another type of fungi, that is used to make some other favorites like bread, cheese, or beer.

While we were enjoying the benefits of these fungi, soil ecologist Daniel Maynard and a team of researchers at Yale University considered the lesser-known fungal communities living beneath our feet. Their research of the relationships between fungal communities in New England forests, published in Ecology Letters, shows that fungi are impacting our lives in more significant ways than we might realize.

A mutually beneficial relationship exists between trees and fungi wherein fungi, also known as mycorrhizae (pronounced: my – cor – rhi – za), attach themselves to tree roots. The fungi then provide nutrients and minerals that they break down from the soil in exchange for sugars produced by the trees.

It turns out that fungi, much like people and animals, take in oxygen and respire carbon dioxide (CO2), a major greenhouse gas. There are an enormous variety and amount of fungi in forest soils throughout the world that live on the roots of trees. The fungi also decompose organic litter that falls onto the forest floor. If these fungi are breaking down so much carbon, it begs the question, where does all the carbon go?

Understanding what fungi do with carbon is important as we estimate forests’ ability to capture CO2 from the atmosphere as human-produced greenhouse gas emissions surge. Researchers are trying to mitigate the impact of these emissions by storing some of this atmospheric carbon in the wood of trees or soil in the forest floor. The amount of CO2used by fungi to support their growth compared with the amount of CO2 they release back into the atmosphere can make a big difference in how forests impact the climate. This ratio of carbon input and output is also known as “carbon use efficiency.” Many factors determine carbon use efficiency in fungi, including temperature, water, and nutrient availability. But, surprisingly, a major element involves complex territorial disputes and alliances between fungal communities.

For the study, Maynard and his research team investigated how inter-fungal relationships are influencing the amount of CO2 being sequestered and released by these communities. They established different combinations of wood-decaying fungi and grew them under controlled conditions. By supplying these fungi with plenty of carbon and nitrogen for food, they observed the effects of competition between the fungi. Maynard then observed where the fungi allocated their supply of carbon by measuring the amount of CO2 released, and the quantity of new fungal growth.

The experiment found that increased competition between species caused the fungi to release more carbon dioxide. Thus, fungi that spend time fighting off competition use their resources less efficiently. The amount of CO2 released by fungi also changed depending on other conditions like temperature and available nitrogen, but remained higher overall when compared to fungi that grew alone.

These findings show how difficult it is to estimate the amount of carbon a forest is removing from the atmosphere. As we search for ways to mitigate larger amounts CO2 in the atmosphere, forests provide an appealing option; if we plant more trees and protect our forests, scientists and policymakers hope, we might take enough carbon out of the atmosphere to slow the warming of the planet. Scientists and policymakers must also consider fungi in the forest equation. Fungal communities, like human societies, are incredibly complex and scientists are only beginning to make sense of them. Further investigation is critical for, as science shows, the forest floor is as important as the trees above.