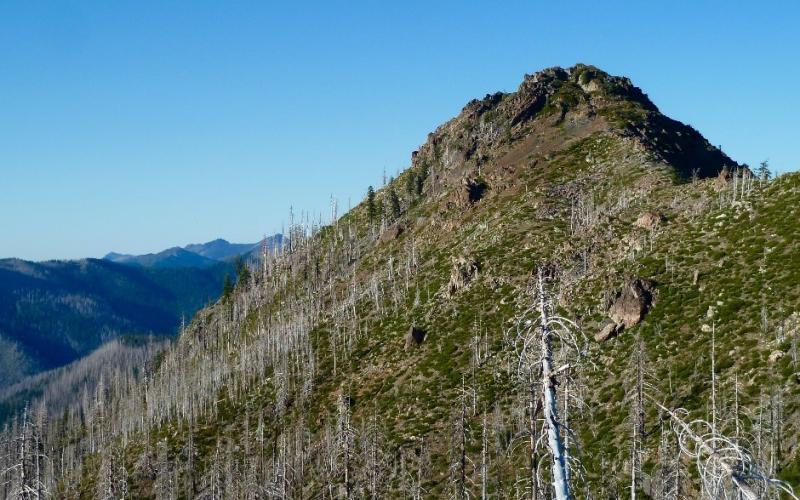 Around the globe, scientists are observing the results of climatic shifts that are producing prolonged droughts and more intense wildfires, among other severe changes. The American West is no exception, having recently experienced a severe drought along with some of the largest forest fires in the region’s history. Many of the trees and other plants in the region evolved with fire, and many even depend on fire for their reproduction. Conifers, like Douglas fir (Pseudotsuga menziesii) and ponderosa pine (Pinus ponderosa), are particularly well adapted to fire. However, the climate of the West is becoming hotter and drier, causing a shift in fire behavior that could permanently change the composition of these iconic forests.

Fire is especially common in the Klamath Mountains, an area encompassing the southernmost extent of the Cascade Mountains in Northern California and Southern Oregon. With its destructive power, a big fire can give an advantage to plants that are otherwise outcompeted. Life returns quickly to post-fire landscapes, grappling and fighting for the new-found space in which to grow. Generally, shrubby plants like chinkapin, tanoak, madrone, and canyon live oak are the first to populate these post-fire sites. New conifers sprout up shortly after, and under the right conditions, shoulder their way past their competitors, eventually overtopping and shading out the sun-thirsty scrubland, establishing a new conifer forest.

For conifers to succeed in growing back after a fire they need the right conditions. Because of their steep terrain, the Klamath Mountains have a range of wet and dry conditions, the driest of which can be used to estimate normal future conditions. These conditions, combined with frequent wildfires, make the Klamaths an ideal place to observe a forest’s response to fire.

A team of researchers, led by Alan Tepley of the Smithsonian Conservation Biology Institute, recently published a study on their observations of the Klamath Mountain forests in Global Change Biology. The study weighs the potential impacts of a changing climate on the conifer forests of the Klamath Mountains. They visited sites that recently experienced severe fire, and measured the time it took for a variety of new conifers to grow. Using statistical models, they determined thresholds where the impact of increasing dryness reduced the ability of conifer forests to grow back after a fire. They think that drier conditions will slow the reestablishment of conifer forest after a fire because they need plenty of water to outcompete the scrubby plants. Eventually, these climatic changes could push forests to a tipping point. The trees will not be able to recover after more frequent and severe fires.

The researchers used previously burned areas in the Klamath Mountains, to represent potential future conditions of the forest. In drier sites, with higher average temperatures, new conifers took longer to outcompete the other plants and establish itself as new forest. Also, the scrubby plants catch fire more easily, and their presence increases the risk for repeated fires, which will restart the clock for the struggling young forest. The longer it takes for conifers to overtop the scrubby plants, the study finds, the less likely it is that a new forest will successfully come back. Therefore, the drier the site becomes, the more likely it is that conifer forest will not regenerate post-fire. The new conditions create a ‘positive feedback loop’ that could permanently eliminate large swaths of forest. The study suggests that anywhere from 16 to 54 percent of the conifer forest could be lost by the end of this century.

The findings of this study may apply to many other mountainous conifer forests throughout the American West. The Douglas-fir forests of the Colorado Rockies or the Sierra Nevada in California, for example, will also likely experience more arid conditions in the future. The study does not recommend any single management strategy to address these threats to conifer forests. Changing from forest to scrubland is not necessarily bad. Open scrubland provides habitat for different wildlife, like birds and reptiles, that do not live in conifer forests. However, if we lose too much forest due to the changing climate, it may have serious implications for the future biodiversity of our forests.