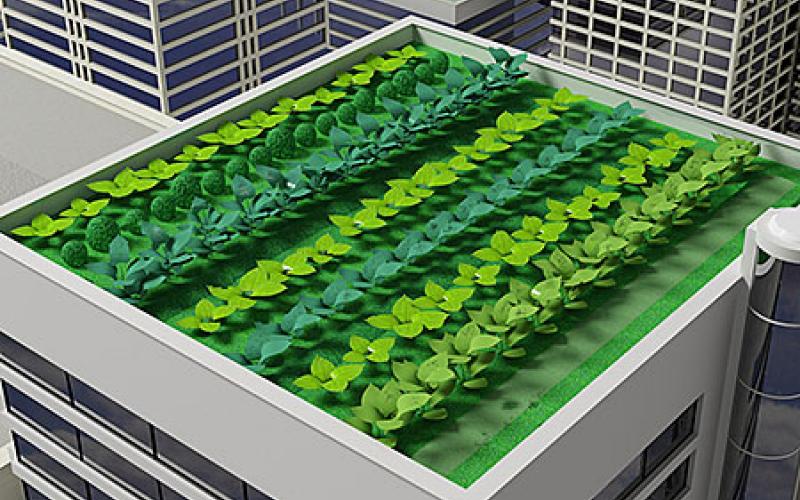 Green roofs, also known as roof gardens, or "eco-roofs," have a top layer made up of vegetation. The plants selected for these roofs are chosen based on geographical region, how much time can be dedicated to upkeep, and how deep the plant cover needs to be. From grasses to shrubs to flowers, green roofs can be made up of an array of plants. These plants insulate the building from intense temperatures, requiring less energy to keep the building at a comfortable temperature.

Three engineers in Italy took these two technologies and combined them to see how effective a "cool-green roof" would be. Their results were published last summer in Solar Energy, the official journal of the International Solar Energy Society. The team, three engineers from the University of Perugia in Italy, used a historical building in Italy for their experiments. Due to unique policies in Italy, many historical buildings are protected from destruction and extensive remodeling. This is done to maintain the historical traits of old buildings. The fact that similar policies exist across Europe to protect the continent's large number of historical buildings can restrict engineers and architects. Cool roofs are not permitted on many buildings because of this type of protection. As a result, older cities, particularly for Europe, create a barrier for energy efficiency innovation.

Another problem related to cities is what is called urban heat island. This is a phenomenon that causes cities to be noticeably hotter than rural areas. Due to the prevalence of surfaces that retain heat — including roofs and pavement — and limited plant life, sunlight is absorbed into and trapped within a city. Cool or green roof technologies can diminish the amount of heat trapped within a city. Not only does this make a city cooler and more comfortable for residents, this dramatically reduces energy use for an entire city – even if cool or green roofs are only on a portion of its buildings, the city as a whole will benefit.

By combining green and cool roof technologies, the authors found a way to bring together the benefits of both technologies in a way that would meet the strict regulations of historical building preservation. On their own, cool roofs are often not permitted on old buildings due to the extensive remodeling necessary to install them. Green roofs, and cool-green roofs, on the other hand are permissible because remodeling is not necessary to install vegetation. This solution could have significant impacts across Europe, where historical building policies are the biggest barriers to energy use and heat reduction innovation. This new technology is also relevant and applicable for new construction, which makes it even more appealing around the world.

Cool-green roofs take the features of cool roofs and apply them to green roofs. A green roof typically uses plants that are drought- and cold-resistant, have low growing rates and require low maintenance. Some green roofs use shorter plants like grass, while others use taller plants like shrubs. Generally, both types of plant are effective, but studies have shown that denser vegetation types do a better job of keeping a building cool. For cool-green roofs, the team added the stipulation that the leaves of the plants should light colored and effective at reflecting sunlight — just like the cool roof technology.

The results of their experiments showed that cool-green roofs can reduce energy use by 97 percent in the summer and 42 percent in the winter. This technology increased the amount of sunlight that a roof can reflect, keeping the building cooler with less energy used. Finally, the cool-green roof drastically reduced the amount of time during which the building was uncomfortably warm, and even marginally reduced the time during which it was too cold.

The results of this team's study reveal that combining two popular technologies could significantly reduce energy needed to control the temperature of a building. What's more, though, is that the results of their experiment presented a solution to make historical buildings more energy efficient. Cool-green roofs can be installed on existing buildings just as easily as on new construction. This technology has the potential to spread across the world. Cities around the globe are getting hotter and energy consumption continues to escalate. For old buildings or new construction, the cool-green technology could be the one-size-fits-all solution that city planners have been looking for.