Burning up: Strategies to control wildfires in a changing climate 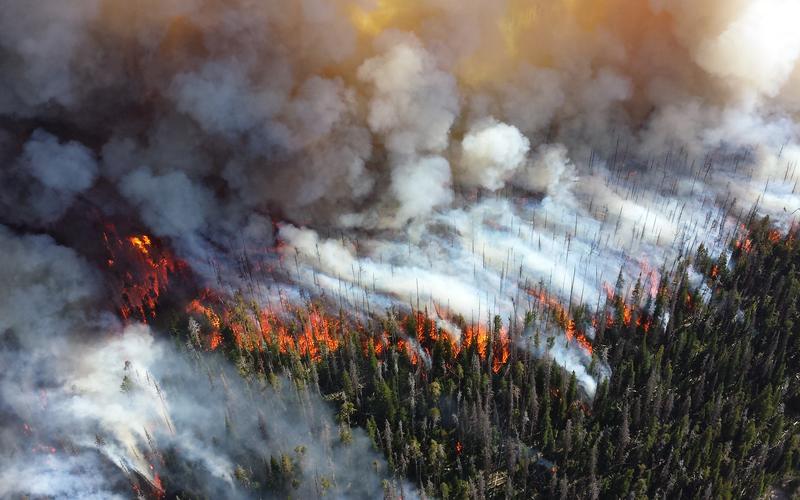 Uncontrollable wildfires are becoming increasingly common and destructive as the climate changes. In 2018, wildfires in California alone burned over 1.6 million acres, killing 93 people and destroying over 23,000 buildings. It was the deadliest and most destructive wildfire season on state record. These large-scale, uncontrollable fires are expected to occur more frequently and burn with a greater intensity due to climate change as average temperatures increase and droughts worsen.

What is important to note is that not all fire is unwanted. Some ecosystems depend on periodic fires to promote diversity and clear vegetation found under the forest canopy. In the Northwest United States, for example, ponderosa pine forests experience low-intensity natural fires about every 25 years that clear away woody shrubs and dead plants and leave behind soil nutrients, creating ideal environments for pine seeds to sprout. However, the dominant fire management strategy in the United States for most of the 20th century has been to suppress all fires, regardless of their ecological benefits. This has created a tinderbox of fuel on our forest floors that would normally be cleared by low-intensity fires. As a result, when fires do occur, they are much more intense. On top of that, droughts driven by climate change are creating the enabling conditions for fires that are bigger than what is ecologically desirable.

The effects of these events are costly. The 2018 wildfire season in the U.S. burned a record 8.7 million acres, causing an estimated $24 billion worth of damage, exceeding the average damage costs of a hurricane. Even as global temperatures continue to rise, there has been little global action to address these issues. The consequences of worsening fires are felt beyond just ecologically, but also economically and socially. In order to tackle this immense challenge, policy makers and land managers need to employ a range of strategies.

Green firebreaks, or strategically planted strips of low-flammability vegetation, are perhaps one of the oldest fire management strategies in use.  This centuries-old technology uses plant physiology to help slow the spread of wildfires. Mature green breaks have lower air temperatures and higher humidity levels compared to their surrounding areas. They also require less long-term maintenance compared to manmade firebreaks such as roads and managed trails. These patches can additionally benefit the ecosystem if they are made up of native species and provide ecosystem services, such as watershed protection.

China is the leader in implementing green breaks, but little is known about their success outside of China, as most of the papers are not in English. Xinglei Cui and his colleagues at Lincoln University sought to share the lessons from their extensive research on this topic with a broader audience and examine how these lessons could contribute to global implementation of effective green firebreaks.

Xinglei Cui’s research team discovered that records of green firebreak use in China dates back to the Song Dynasty (997 BCE). Today, China has more than 300,000 kilometers of green banks with another 100,000 kilometers planned for construction. Knowledge of local plant species is needed in order to design an effective green break, but when implemented correctly, they can have real benefits. In Fujian, China, in 2000, a fire that crossed a 12 meter-wide road was then stopped by a green firebreak.

Green breaks, however, can also be threatened by climate change. Research from New Zealand has shown that plant communities, which are increasingly dominated by invasive species, are becoming more flammable. As the number of invasive species grows around the world, natural fire cycles in those ecosystems will change too. Invasive species that co-occur with native plant species are increasing the overall flammability of entire regions. Green breaks are not immune from this threat.

Forest managers in fire-prone regions could construct green firebreaks in strategic regions to safeguard critical structures or ecological regions. While green firebreaks can be an effective tool in fire management, in order to fully address the issue of larger fires, these traditional techniques must be combined with more modern ones.

Modern technology provides new tools that can increase people’s ability to predict high-risk fire areas, quickly respond to fires when they start, and protect vulnerable populations. Researchers Harkiran Kaur and Dr. Sandeep Kumar Sood are utilizing the Internet of Things (IoT) for real-time wildfire prediction and monitoring. The basic idea behind the IoT technology is to connect any piece of technology to Wi-Fi, creating a network of connected “things” – wearable devices, thermostats, you name it – which gather and transmit data.

Adapting the IoT to wildfire monitoring involves deploying small sensors and adapting existing sensors on weather stations to capture climatic condition data and communicate them instantly. WiFi enabled phones, for example, could be retrofitted with humidity sensors and could send that data to a server. Models can then analyze the data in real-time and can send alerts when potentially hazardous conditions are registered. Instantly identifying locations which have high fire risk or where a fire has started can allow for precautionary measures and rapid response.

Harkiran Kaur and Dr. Sandeep Kumar Sood tested this technology in several parts of India with great success. Their study used the mobile phones of local forest guards as data collection devices to monitor climatic patterns and predict the area of forest that was threatened by wildfire occurrence. They then compared that data to real fire events in 2018. The models predicted the area of burnt forest with great accuracy, highlighting the potential for this technology.

While the IoT can collect information from existing devices, widespread monitoring will require the deployment of many more devices to get comprehensive data. This scale of deployment is costly and time consuming. However, this data can inform development policies, such as where structures can and cannot be built, and can be help disaster management agencies mitigate against the predicted increase in uncontrollable wildfires.

Technological advances and green firebreaks are valuable assets in broader fire management strategies. However, these tools, among other strategies, need to be proactively incorporated into fire management policy in order to be effective.

Historically, fire legislation has been criticized for being reactive to large scale events instead of proactive. Analysis of forest legislation studies from 1997 to 2017 by Dr. Reis Mouraoa and Dr. Vitor Domingues, published in Ecological Indicators, sought to investigate this situation on a global scale. Their research found that forest fire legislation over their thirty-year study period was mainly reactive to large fire events. This means that policymakers changed existing legislation or created new legislation after fire events had occurred. One interpretation of this is that governments are more concerned with responding to already burned areas than with implementing strategies to protect standing forests and high-risk zones.

Wildfire management legislation at any scale is accompanied by challenges concerning enforcement, economics, and more. Having legislation in place, regardless of how proactive it is or what management strategies it includes, does not guarantee impact without proper implementation and enforcement.

The devastating effects of fires cannot be ignored. Large wildfires are often deadly and cost billions of dollars. There is no one solution to adequately address the expected increase of uncontrollable large-scale fires. A combination of legislation, innovation, and physical strategies is needed in order to safeguard vulnerable populations and avoid catastrophe. These are just three strategies in a suite of many which must be employed to mitigate against future tragedy. Without swift and widespread action, large-scale wildfires will continue to devastate communities as climate change sets the stage for them to burn with more intensity.