Wastewater in Delhi: Not all viewpoints are equal 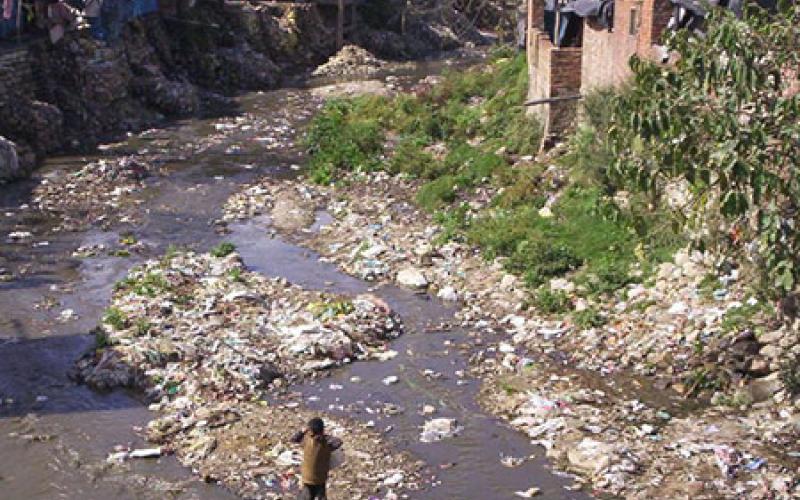 In Delhi, India, large open plots have become illegal dumping grounds. Stagnant wastewater attracts mosquitoes and afflicts the poor with water-borne diseases. But while wastewater stagnation and overflow are some of the most prominent problems in the city, the experiences of people living near wastewater sites are left out of policy makers' agendas. Less than 50 percent of the city's sewage is currently treated, with half of Delhi's population disconnected from the central sewer system. Black water eventually flows into the Yamuna River in areas of Delhi that are lacking sewer lines. As the city hashes out the details of its 2021 Master Plan, heads often turn away from the unequal water infrastructure and poor sanitation marking unauthorized settlements in the area. Why are first-hand accounts of wastewater conditions dismissed so readily?

The problems are not distributed evenly. People living in slums interact with wastewater daily, while municipal workers are exposed to the conditions through their job. However, the Central Pollution Control Board, serving the Government of India's Ministry of Environment and Forests, relies on experts to conduct regimented, quantitative analyses that inform wastewater management and water quality restoration policies. These three groups have a vastly different understanding of the city's water system. Yet, all three perspectives are needed to avoid environmental injustices and rights violations.

In a recent paper published in Habitat International, a team of two researchers interviewed government experts, municipal workers, and people living in unauthorized settlements in Delhi. From 2008 to 2009, 70 qualitative interviews were conducted with working class Muslims living in East Delhi. The researchers organized two focus groups of municipal workers — namely scavengers and sweepers — and conducted interviews with higher-ranking staff. Twenty scientists working within the board were also interviewed between January 2009 and April 2010. Data from interviews were supplemented with observations, maps, and participative methods. The researchers then used a software program for qualitative analysis to identify themes in the data.

Researchers found that each group had developed its own knowledge based on their experiences with wastewaterin Delhi. Women living in unauthorized settlements regularly removed silt and garbage from drains that were neglected by municipal workers. Septic tanks were emptied by hand or water pump and latrines were avoided during heavy rains. Water taps in front of houses were also submerged leading to risks of drinking water contamination. During monsoon months, roads were flooded with storm and wastewater making transportation difficult. People living in unauthorized colonies and settlements complained that these conditions led to health problems and social ridicule.

At the municipal level, many key positions, including the senior sanitary inspector, remained vacant. Scavengers and sweepers were socially excluded. Many former employees had left for a neighboring ward and shifts were no longer being monitored. Workers often bribed those in charge of attendance sheets to avoid coming into work. However, these municipal workers also gained a deep knowledge of the city's wastewater infrastructure. They revealed that drains made of compacted soils often collapse. Additionally, water is much harder to drain in the city's lower elevation areas.

The Central Pollution Control Board coordinates water quality restoration programs in India. Focused on policy implementation, the board's members provide technical assistance to the state, city, and district authorities. Their principle task is collection of river data. But their work is tied to monitoring stations and hardly ever relates to understanding pollution issues in slums and unauthorised colonies. Moreover, non-technical descriptions that aren't validated by expert scientists are also left out of conversations at the national level. Thus, local citizens' first-hand knowledge is not used to inform policy interventions.

These case studies shed light on the complex power relationships surrounding wastewater knowledge. They further allude to larger questions around wastewater flows in cities and their politicization. Urban political scholars often neglect these questions. Their focus remains on access and distribution of water, but not its disposal as wastewater. The knowledge of people living in unauthorized settlements, however, is built on everyday sensory interactions with wastewater. Commonsense, thoughtful speculation and analysis often drive this type of knowledge. Municipal workers have hybrid knowledge, which stems from sensory interaction and technical expertise. The Board's knowledge, on the other hand, is based on testing and collecting quantitative data.

Unfortunately, not everyone's knowledge of wastewater is considered. Often, these different arenas of knowledge and sense making are deeply contested. Expert knowledge is valued, while peoples' experience-based knowledge is dismissed. People living in unauthorized settlements are instead viewed as less clean, less educated or less hygienic. These perspectives solidify systems of acceptable knowledge and influence perceptions of social position in the city.

Nobody has a complete picture of the scale of wastewater challenges in Delhi, and as a result, solutions are few and far between. Residents of urban slums are left out of the city's plans for infrastructural improvements, are misunderstood and misrepresented in the public eye. Perhaps these case studies could provide the scientific evidence that is needed to legitimize the unheard stories of urban residents who also rely on basic water rights. Furthermore, drawing insights from urban political ecology, the authors bring attention to the roles that class, gender, and knowledge politics play in the production of wastewaterscapes. This dynamic is often missed in wastewater management, but is a necessary part of understanding how wastewater affects different urban citizens and environments as cities in the Global South continue to grow.