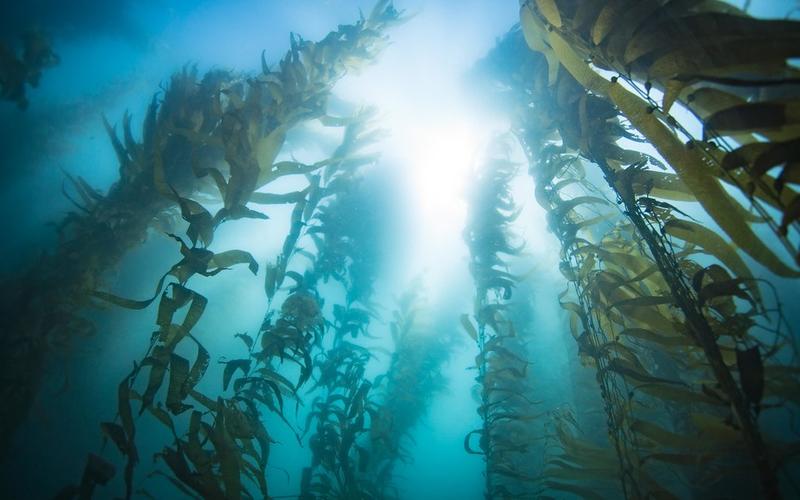 Standing on any rocky beach in America, you probably don’t think that swaying underneath the waves is an opportunity to help mitigate climate change. But below the surf is likely a forest of sugar kelp, one of several species of macroalgae that grow globally. Picture the large, slimy pieces of seaweed you find on the beach, instead interconnected along the ocean floor, forming an underwater forest ecosystem. New research suggests that macroalgae may play an important role in addressing climate change by removing carbon from the atmosphere.

Oceans absorb almost 30 percent of global carbon dioxide, and as macroalgae grows, it takes in that carbon dioxide from the water. When the plant dies, it breaks apart and sinks to the ocean floor, where the carbon is stored in sediments; a process that mimics the way fallen autumn leaves become part of the soil. While there is increasing consensus on the need to grow trees for their ability to mitigate climate change, new research suggests that similar attention should be paid to macroalgae cultivation. Macroalgae has lots of available water to grow in, which gives it an advantage over land-based strategies that must compete with other land uses. Though growing macroalgae for carbon storage is still an emerging field, it has the potential to store significant amounts of carbon dioxide.

Research published in Nature Geoscience by Dr. Dorte Krause-Jensen and Dr. Carlos Duarte in 2016 shows just how significant this strategy may be. They found that existing macroalgae has the potential to trap up to 173 teragrams of carbon per year. That’s a lot: equivalent to the yearly emissions of 134 million passenger vehicles, or 1.5 billion barrels of oil. The researchers also calculated how much stored carbon makes it to the deep ocean, where it is buried in sediments. For example, the Monterey Bay Peninsula in California alone deposits 130,000 tons of carbon per year in an underwater canyon. Once there, most of the carbon stays locked in sediment for hundreds to thousands of years.

This process of storing carbon for a significant amount of time is important. Limiting global temperature increase to 1.5o C by 2100, the global agreed-upon benchmark for avoiding the worst of climate change, will require the capture and storage of some of the greenhouse gases we’ve already released.

So what would it take to start growing macroalgae specifically for climate change mitigation? The first step is mastering cultivation in new regions.

According to a 2017 study published by Dr. Jang Kim and colleagues in the journal Algae, the vast majority of current macroalgae cultivation occurs in Asia. Seaweed cultivation is a relatively new practice in Europe and the Americas. Humans have spent thousands of years cultivating plants on land, and if people want to scale macroalgae globally, we’ll need many seasons of growth to master cultivation in different regions. Just as growing corn is different in China than in the American Midwest, macroalgae grown off the coast of California requires different cultivation techniques than if it were farmed near Japanese shorelines. Like terrestrial crops, macroalgae also requires pest management and managed conditions like water temperature and nutrient levels – controlling these could disrupt the natural conditions in the ocean. The impacts of human cultivation in the ocean need to be further understood for it to responsibly expand in different regions.

Kim and colleagues also identified another critical enabling condition: a market to buy the macroalgae. Growers need an incentive. However, once macroalgae is pulled out of the ocean and processed for commercial use, its climate change mitigation potential is lost as the stored carbon is quickly re-released. For example, macroalgae is commonly used in animal feed, which, once consumed by the cow or pig, is returned to atmosphere in the form of methane or carbon dioxide. Coastal farmers need incentivizes to grow macroalgae in order to start developing new strains and farming practices in new regions. Market-driven cultivation may not help the climate now, but it does prepare growers for a potential macroalgae cultivation future. In the meantime, other incentives will need to drive development.

Recent research highlights two innovative macroalgae growth strategies that can provide benefits beyond carbon storage, which will help to stimulate new cultivation without harvesting. This means that in certain circumstances macroalgae can be left in the ocean to store carbon because there are other factors incentivizing growth.

The first strategy, discussed in a 2019 study led by Dr. Halley Froehlich and colleagues, shows how macroalgae cultivation can help improve damaged ocean conditions. Their study identified 77 countries – over 750 sites – where growing macroalgae can help restore oxygen levels or reduce excess nutrients in the water. For instance, fertilizer from fields in the Midwest runs off into the Mississippi River, eventually flowing to the Gulf of Mexico. Once there, excess nutrients can cause algal blooms – unrestricted algae growth – which causes the ocean to look green and thick. These blooms remove much of the water’s oxygen, killing fish and other aquatic life. By growing macroalgae along the coast of the Mississippi River Delta, those nutrients could sustain macroalgae, which then will restore oxygen and take in carbon. This process can benefit local communities and help support healthy oceans across the globe.

The second case where macroalgae can be grown and not harvested is when growers are paid through policies to leave macroalgae in the ocean for its climate benefit. Climate change mitigation leaders, like California, have existing and forthcoming policies that encourage macroalgae growth. Froehlich and colleagues note that the 2015 Senate Bill 1383, the “Natural and Working Lands” component of the California Climate Action Plan, and the forthcoming “Ocean Resiliency Act” bill (SB-69), all contribute to incentivizing macroalgae cultivation. They also note that all of the emissions from California’s agricultural sector could be offset by macroalgae growth in only 3.8 percent of the identified regions. In places with capacity for advanced climate policy, there may be a meaningful opportunity to begin scaling macroalgal growth today, which can help set the stage for later adopters.

Cost is also an important factor. As this practice becomes more common and widespread, the costs will fall. However, in order to be a competitive carbon removal strategy, macroalgae cultivation needs to be cheaper than other land-based solutions like tree planting. Froehlich and colleagues identified a wide range of costs per ton of carbon dioxide stored, which means that in certain regions it will likely not be economically feasible because of local growing conditions.

Any ocean-based carbon removal strategy has to go hand-in-hand with land-based strategies and a dramatic shift away from fossil fuel use. But, unlike other mitigation strategies, ocean-based solutions have vast, unexplored potential. Froehlich and her team identified 48 million square kilometers, or about 10 percent of the globe’s surface, that could be cultivated for macroalgae. That’s a lot. Even though macroalgae cultivation is limited by many factors, these findings highlight the raw scale of opportunity. Though there is a need to overcome economic constraints, knowledge and policy limitations, and potentially harmful ecosystem impacts, emerging research suggests that macroalgae cultivation may be a meaningful piece of the climate puzzle.

Widespread adoption of this strategy will require investment in research, advancing state and national climate policies, and creating new markets which can help ocean farmers explore the potential and limitations of macroalgae growth in regions across the globe. If underwater forests are ever going to help address climate change, their development needs to start now.