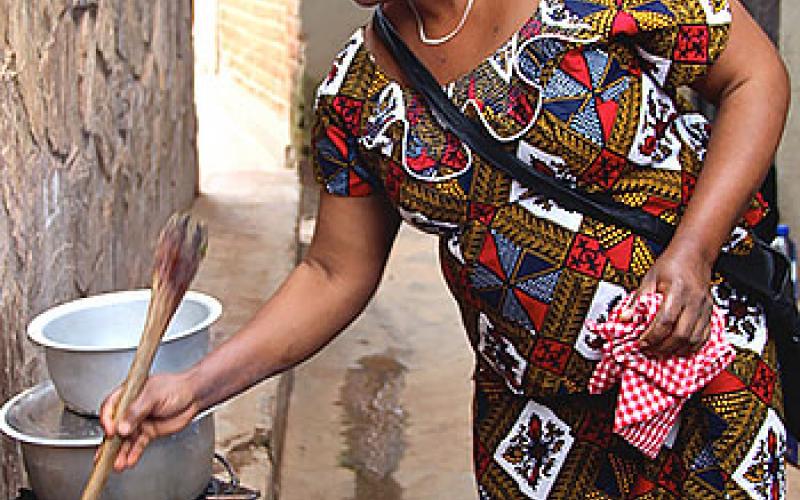 In Rwanda, the two main causes of death for children under the age of five are pneumonia and diarrhea — two diseases that are closely linked to the environment. Pneumonia, in particular, is caused by household air pollution resulting from the use of traditional biomass as cooking fuel. Many mothers in Rwanda carry their infants on their backs while cooking —which often involves burning wood with little or no ventilation. From an early age, children are exposed to the harmful effects of smoke for long hours. Globally, household air pollution and contaminated drinking water are the 7th and 8th biggest causes of disease and are responsible for 6.9 million diarrhea- or pneumonia-related deaths annually.

In a recent study, led by Corey Nagel of Oregon Health & Science University, a team of scientists investigated the effectiveness of a national program in Rwanda to distribute and promote improved cookstoves and advanced water filters in poor communities. The study, the first of its kind in a low-income country, represents a first step in designing wide scale interventions relating to household air pollution and the drinking of contaminated water.

For the study, published in the journal Contemporary Clinical Trials Communications, nearly 100,000 households in 72 sectors (administratively defined units) were selected to receive household pollution interventions through a government-sponsored program; another 30,000 households served as controls. The researchers then monitored the households that received the equipment for signs of improved health outcomes. (The study was unique in its funding mechanism, scale, and delivery mechanism, and in the combination of interventions to address two sources of pollution. Researchers focused on these two interventions for two reasons. The first was the limited evidence of health impacts of improved cookstoves on vulnerable populations. The second was the overwhelming evidence of the effectiveness of household-based water filters in reducing diarrhea.)

When selecting households to receive the stoves and filters, the researchers targeted homes with at least one child aged four or under living in the home longterm, and where the primary cook was at least 16 years of age. The 100,000 households housed roughly 458,000 individuals. And over the next year, they recorded incidences of acute respiratory infection (ARI) and diarrhea among children under the age of five.


In order to assess the effectiveness of the program, researchers would rely on health facilities and community health workers, which collected any cases involving acute respiratory infection and diarrhea in the study areas. Secondary outcomes involved baseline surveys of selected village-level studies. These involve tests of household drinking water, (this is related to diarrhea) and on cooking practices and their impact on household air pollution.  While the effectiveness of these interventions are yet to be proven at a national level, researchers observed improvements in terms of air pollution and water contaminates on a local scale.

Since no other similar study has been done at this scale, researchers see positive global implications that could be used in designing interventions on behalf of children in the world's poorest regions. As pneumonia and diarrhea continue to threaten these communities, such studies offer important insights on the immediate steps that respective governments can take.
Read more regarding:
Society & Health
Policy & Business
Parfait Gasana