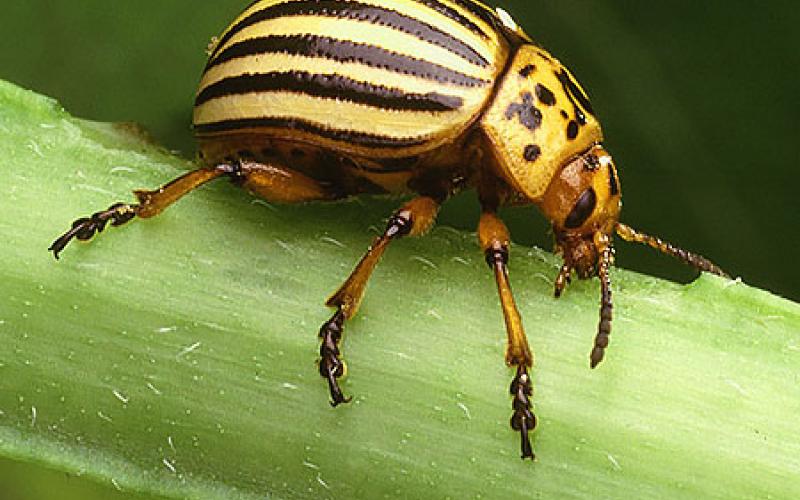 Today, the standard method to combat crop-eating insects is through the use of chemical control. Widely applied insecticides target eggs and larva to reduce pests before they become a problem for farmers. However, many insecticides are toxic to humans and can have ecosystem-level consequences if the insecticides accumulate. As scientists communicate the ramifications of insecticides to the public, consumers are placing pressure on producers to find alternative solutions.

To find alternatives to insecticides, farmers have to get a little more creative with pest management. For inspiration, they have turned back to nature. Scientists Sara Hermann and Doug Landis at Michigan State University summarized recent scientific studies and published their review in the journal Current Opinion in Insect Science. Among their findings, they suggest that using predator cues in agriculture could be successful in the future, but there are still a few unknowns.

Crop-eating insects have naturally occurring predators. Grasshoppers are eaten by spiders and birds, aphids are eaten by ladybugs, and caterpillars are eaten by wasps. When predators are present, they will consume crop pests and keep pest numbers down. It is possible to manage crop pests by introducing beneficial predators to fields or enticing them with suitable habitat. However, this kind of biocontrol can be tricky to time and expensive to manage.

Instead of actively managing for predators, it may be easier to trick pests into thinking predators are nearby. Prey can detect predators in several different ways, including typical cues of sight, smell, and sound. Rather than maintain a group of predators near crops, farmers could mimic these cues to induce a fear response in prey and thus deter pests from eating their crops.

In general, when prey sense predator cues, they change their behavior to reduce their chances of being eaten. Yet before cues can be widely applied to manage crops pests, scientists need to understand the mechanisms by which prey detect and respond to predator cues.

One challenge in understanding prey responses lies in determining how different crop management strategies affect the dynamics between insect predators and prey. For example, monoculture fields have a drastically different habitat structure than polyculture fields. Habitat structure can determine whether or not predators thrive, and can drastically alter how pests perceive cues of imminent predation risk. Thus variation in crop management could be an important factor in the effectiveness of applying predator cues.

Hermann and Landis also say it is important to conduct studies over multiple growing seasons. Insects could learn over time that the smell of a predator doesn’t actually mean they will be eaten, and they could eventually evolve a resistance to certain cues. Longer term studies will help scientists understand the effectiveness of predator cues and whether occasionally changing the type of cue is necessary.  The use of predator cues combined with the actual presence of predators may be the most efficient way to control pests.

Despite many unanswered questions, researchers are already testing the tactic of using predator cues on crop pests with the Colorado Potato Beetle, a major pest of potato crops throughout North America. When potato plants are left untreated, these beetles can rapidly destroy crops and leave farmers in a bind. A natural predator of the potato beetle is the stinkbug. If potato beetles smell a stinkbug, adult beetles will lay fewer eggs, eat less food, and move to a stink bug-free area. Producing stink bug scent and releasing it in crop fields is not yet a commercially used method of controlling pests, but it may be applied in the future.

The struggle against crop pests is not unique to potato farmers, which is exemplified by the controversial and widespread use of insecticides. While insecticides are unlikely to be completely removed from modern crop production, using natural relationships could be the key to ensure food security.