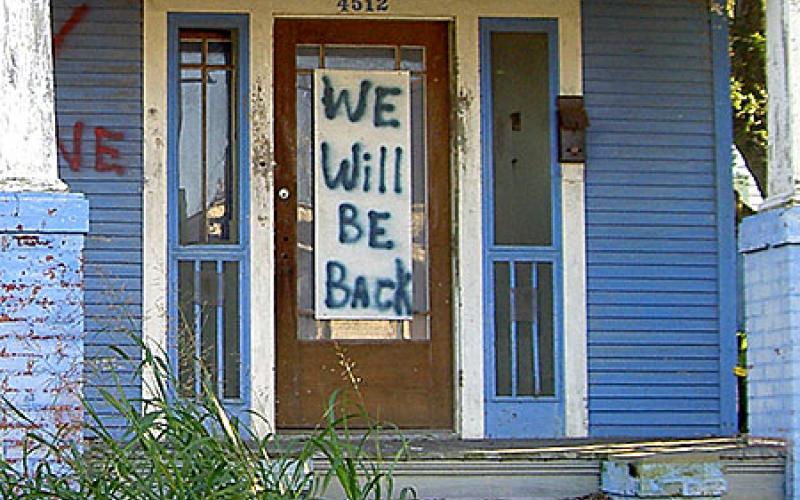 In the aftermath of Hurricane Katrina, low-income neighborhoods such as the Lower Ninth Ward were left out of the city's renovation plans. Although grocery stores and food vendors have long been absent from the neighborhood, backyard fruit and vegetable gardens were common until the hurricane struck in 2005. Taking revitalization efforts into their own hands, in 2009 a local resident formed the Backyard Gardeners' Network. Backyard gardens not only provided food, but also served as gathering spaces where conversations surrounding social and economic justice unfolded. In these spaces, food security was discussed within the broader context of structural racism.

Community-led backyard gardens and social gatherings drew attention to the Lower Ninth Ward, where residents voiced concerns over the influx of young, white volunteers and "experts" reimagining the devastated neighborhood. Determined to rebuild the Lower Ninth Ward on their own terms, a growing group of community activists formed the Lower Ninth Ward Food Access Coalition. A new "food action plan" was soon drafted that called on historic, local knowledge. The plan connected healthy eating and environmental literacy to self-sufficiency and self-determination.

The Lower Ninth Ward Food Access Coalition went on to reclaim vacant lots, which cover a large area of the neighborhood. Converting these lots into public gardening and gathering spaces, community members demonstrated that they could also govern public sites without intrusion from external parties. Ultimately, residents redistributed political power and gained agency. In a recent paper published in Urban Forestry & Urban Greening, researcher Catarina Passidomo refers to these neighborhood-scale actions as "political moments." By demanding equitable access to fresh food and reshaping vacant lots to meet the community's needs, residents of the Lower Ninth Ward shifted control of their neighborhood's public spaces into their own hands.

Furthermore, Passidomo claims that the Lower Ninth Ward can be analyzed using two frameworks. The first framework is "Urban Political Ecology," which links environmental and socio-economic problems in cities. This framework can be used to examine why certain parts of cities are continuously exposed to environmental harm while others are not. The second framework is "Right to the City," which can be used to examine how communities shape cities to suit their own needs.

Looking at the Lower Ninth Ward as a case study, Passidomo combines both frameworks to explore the long-lasting potential of community-led actions. Although these greening actions might start at the scale of neighborhoods, they spur community engagement. With growing numbers of environmental stewards, neighborhood efforts can scale up to city or state levels. Ultimately, communities can transform local institutions and provide models for other neighborhoods and cities to follow. With enough backing, residents who are otherwise apolitical might be inspired to join. Additionally, engaging young people prepares a second generation of stewards and activists who are ready to make long-term commitments.

Small-scale neighborhood actions can do much more than previously thought. In addition to meeting the basic needs of residents, these actions shed light on structural racism, equitable urban spaces and long-lasting, community-led solutions. Community members can do far more than occupy a space. As evident in the Lower Ninth Ward, residents with local knowledge are uniquely positioned to create and govern the neighborhoods they inhabit. The focused effort of residents living in the Lower Ninth Ward demonstrates the benefit of disrupting dominant structures of power. By reclaiming power over urban green space, communities can meet basic needs and pave a productive and equitable path forward.