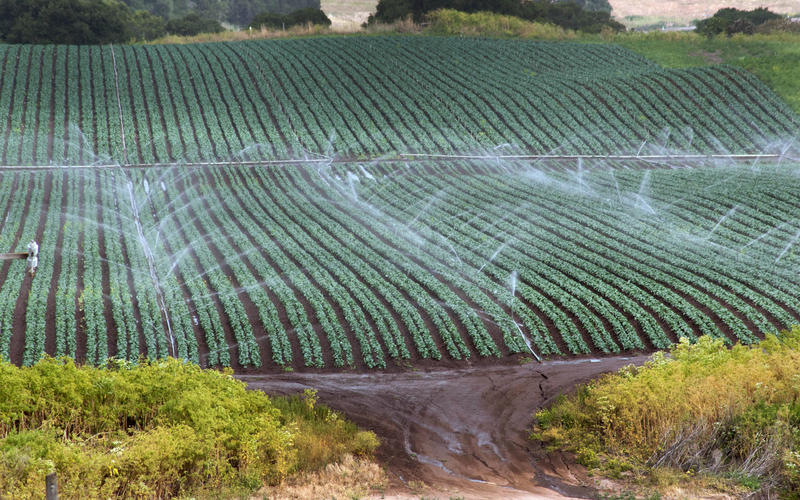 Globally, groundwater – water from wells – provides close to half of all drinking water. When changes in rain patterns and increased demand stress surface water supplies from lakes and rivers, water managers and individuals turn to groundwater for salvation.

The process that delivers arsenic into aquifers is slow and involves many parts. Arsenic is a naturally occurring element in the environment. Rivers transport arsenic to the San Joaquin Valley by cutting through arsenic-filled geologic formations in upstream coastal mountain ranges, a process that has occurred for millions of years. Once the arsenic reaches the Valley, over time, the constant movement of the rivers buries the arsenic in clay soils deep below the earth’s surface. Other soil types without arsenic, such as sandy and gravely soils, stack on top of the clay layers. Groundwater within an aquifer usually flows horizontally close to the surface, moving through arsenic-free upper soil layers. When over-pumping stresses the aquifer system, wells pull more water from deeper clay soils. When pumps have to pull from deeper soils, the arsenic buried in the soil comes with it, mixing with the groundwater.

Groundwater pumping in the San Joaquin Valley has caused groundwater level declines of around 60 meters or 200 feet over the last 100 years. When the water is removed, the weight of soil and rock crush the air pockets which once held water. The land above the aquifer sinks and settles through subsidence, permanently compacting the aquifer. Subsidence can be dramatic with severe pumping: in the San Joaquin Valley, some land has dropped more than 30 feet since the 1920’s.

Researchers at Stanford University studied the link between excessive groundwater pumping and increased aquifer arsenic concentrations in the San Joaquin Valley. They focused on the Tualare Basin, a highly productive agricultural region in the Valley. The researchers measured land subsidence to understand groundwater pumping rates and applied a mathematical equation to use subsidence as an indicator of arsenic concentrations.

When farms use arsenic-contaminated water, the produce can become contaminated as well. Arsenic has detrimental, sometimes lethal, effects on human health, such as an increased risk of cancer, heart disease, and diabetes. According to the World Health Organization, arsenic levels as low as 10 milligrams/liter are harmful. For context, this is the equivalent of about three sesame seeds in a large McDonald’s soda.

The relationship between subsidence and groundwater arsenic enabled the Stanford scientists to use Interferometric Synthetic Radar (InSAR), a remote sensing system that uses radio waves to detect objects, to collect subsidence data to predict arsenic levels. The scientists developed two separate models, one to predict recent arsenic concentrations from 2007 to 2015 and a second that predicts historic arsenic concentrations from 1986 to 1993. During these time periods, severe droughts led to groundwater depletion and subsidence in the San Joaquin Valley. In both models, subsidence from over pumping markedly increased the risk of arsenic contamination.

There’s no question that groundwater is an important part of California’s water resources and that it must be sustainably managed. This study allows water managers and policymakers to more easily assess the impacts of over pumping and subsidence. In addition to ensuring that water users don’t over pump groundwater, policymakers must mandate that water agencies monitor groundwater quality more regularly and provide the funding needed to develop monitoring devices. The technology industry might be able to help by designing easy-to-use devices that can detect arsenic at low levels.  Such a policy change would be an important next step in ensuring that that millions of people have access to safe groundwater and that America’s produce is not tainted with arsenic.