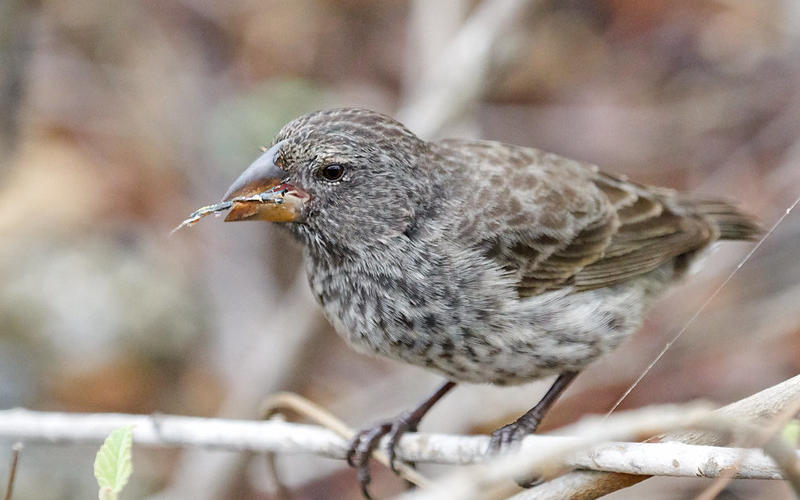 When Charles Darwin visited the remote Galápagos islands in the Pacific Ocean, 1000 km west of Ecuador’s coast, he noticed that the birds generally looked a little different on each island. The birds had broad beaks on the islands with large, tough-shelled seeds, and the birds had narrower beaks on the islands with smaller seeds. Each species was better adapted to the food source on its respective island. These observations helped Darwin develop his theory of natural selection. Only recently have scientists realized that the finches may be doing more than eating local seeds—they may be dispersing them too.

On a recent field expedition, a team of researchers from Spain and Canada observed Galápagos finches collecting seeds for nest material. This method of seed dispersal via nest construction, known as caliochory, was only officially defined by scientists in 2017. In caliochory, birds weave seeds with fibrous coatings into their nests. After the birds abandon the nest, it may fall to the ground during heavy rain. Protected by the decaying nest material, the seeds have a fertile bed for germination.

In the Galápagos, the finches collected cotton ball-like seeds from the Darwin’s Cotton plant. Without the birds, these seeds are wind-dispersed. Wind dispersal is highly effective at transporting the seeds over long distances. However, wind dispersal happens only during the dry season—a time when germinating seeds may not survive, and rodents and insects eat most unburied seeds. In contrast, seeds dispersed in a bird nest tend to reach the soil during wetter months. Because abundant rain helps a new plant grow rapidly, this is a good time to germinate.

To test whether cottonseeds are still viable after spending a season or two as nest material, the team tracked down two recently fallen nests on some of the islands.  Under simulated natural conditions, they found that the seeds embedded on the bottom germinated within 72 hours of the nest hitting soil. This shows that seeds that have been handled by birds and placed in nests can successfully sprout.

The research team also warned that nest dispersal could pose an unforeseen environmental problem. Finches are willing to use unfamiliar items as they build their nests, so they may collect seeds from invasive species, and unwittingly disperse them via their nests. In recognizing the potential consequences of caliochory, we may be able to prevent the future spread of invasives in an innovative way.

It turns out that many species around the world weave seeds into their nests, but the case of the famous Galápagos finches is especially striking. Scientists and the public alike have kept a close eye on the reproduction and population dynamics of these birds, but there has been less of an effort made to explain their general behavior. This case, where a bird nest can be more than just a home for birds, may remind us that science as a field still has much to discover. In coming years, we may do well to take a closer look at what is hidden in plain view.