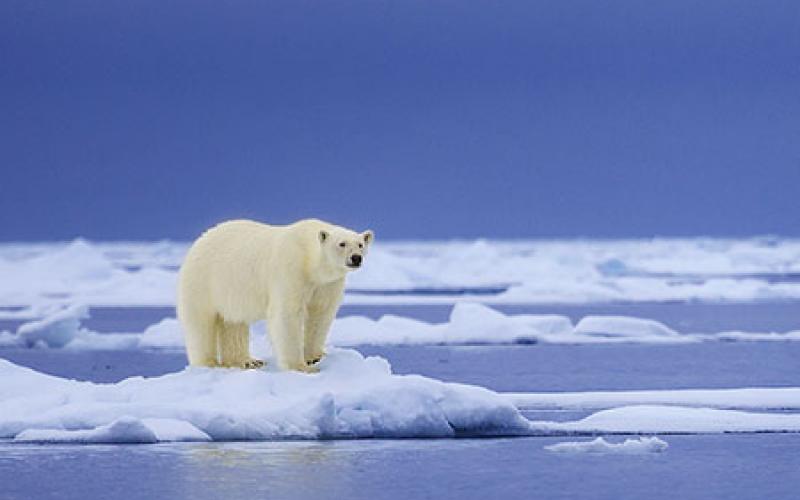 Polar bears, uniquely adapted to Artic conditions, rely upon vast stretches of winter sea ice to hunt seals, dolphins, walruses, and belugas to gain enough fat to survive through summer when the sea ice breaks up. But the Earth’s changing climate is causing Arctic sea ice to melt earlier in the spring and freeze later in the fall, forcing polar bears inland earlier each year. Without ice, polar bears are deprived of their primary food source — seals — and are instead turning to the eggs of nesting Arctic sea ducks for survival.

In a recent study published in Global Change Biology, a team of researchers from multiple Canadian universities, led by Cody Dey, a postdoctoral fellow at the University of Windsor, tested whether preying on eider eggs could help polar bears gain as much nutrition as they do from seals. The researchers also examined how increased nest-raiding by polar bears affected the distribution of eider nests and the size of eider duck colonies.

For their research, Dey and his team used a technique called agent-based models. Each polar bear and eider duck pair were treated as “agents,” and then assigned “behaviors” using existing data on biology of bear diet and energy needs, and patterns of bear movement and eider nesting. The researchers then simulated whether predation of eider nests by polar bears due to the loss of sea-ice would change the sizes and locations of nesting colonies. The results suggested that when the ice broke up earlier in the summer, polar bears preyed on more eider nests and destroyed 20 to 40 percent of all eider nests. Despite increased hunting of eider eggs, the health of polar bears still declined, particularly among the females and sub-adult bears.

In response to polar bears hunting more eggs, eider colonies moved closer to the mainland, became 20 percent smaller on average, and moved farther from one another. These changes in eider nesting habits could make nests more vulnerable in general. Large colonies farther from the mainland also protect eider nests and chicks from other predators such as Arctic foxes. The researchers warn that if other predators destroy more eider nests, it could reduce their populations even more severely.

Previous studies have linked the loss of sea ice to poorer health, higher cub mortality, and population decline among polar bears. This study showed that early ice-melt could increase hunting of eider eggs by polar bears, but still not help polar bears gain the fat they need. Moreover, fewer nests and smaller eider numbers mean that people in the Arctic who rely on eider ducks for meat, eggs, and down feathers could lose a valuable source of food and livelihood.