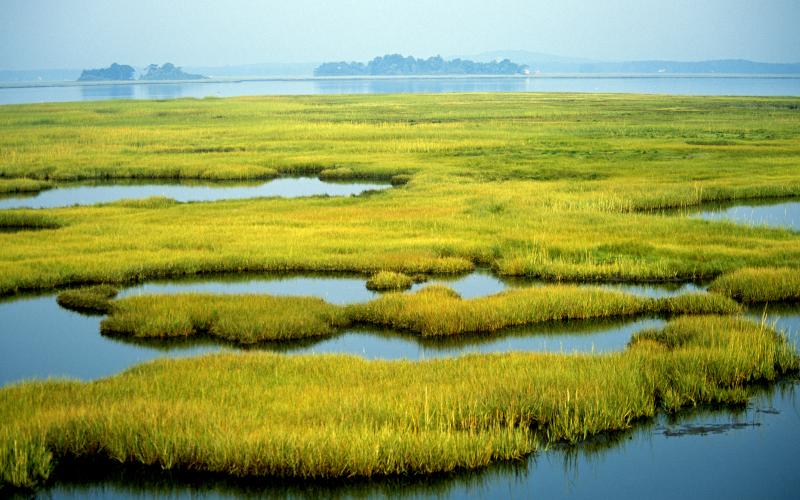 Approximately 39% of the U.S. population lives in coastal counties, which means that coastal wetlands and nearby communities intimately coexist. A coastal wetland can be defined as an ecosystem that undergoes tidal fluctuations, and includes habitats such as salt marshes, mangrove forests, and salt flats. These habitats provide a wide range of ecosystem services, or benefits to humans, such as flood protection from storm surges, land erosion control, improved water quality, and biodiversity of fish and shellfish species.

However, both development along the coast and anthropogenic climate change have made coastal wetlands particularly vulnerable. Under normal conditions, wetlands can naturally keep pace with changing sea levels. In a process called accretion, plants trap sediment, which increases the elevation of the wetland’s surface. However, due to climate change, higher rates of sea level rise are projected to “drown” many coastal wetland ecosystems. This means that sea levels could rise faster than a wetland’s natural accretion rate. For this reason, the retreat of these habitats upland into higher elevations is recognized as a way for tidal saline wetlands to survive in response to sea level rise. Available, undeveloped land in higher elevations is needed for migration to occur. This can prove difficult in urbanized areas along the coast.

In a recent paper published in the Journal of Applied Ecology, researchers from the United States Geological Survey (USGS) quantified areas along the Gulf Coast of the U.S. where wetland retreat could and could not occur due to development. Using land elevation and tidal data, they determined current coastal wetland boundaries and then calculated the amount of upland area that would potentially become wetlands by the year 2100 under three different future sea level rise scenarios (specifically, 0.5, 1.0, and 1.5 meters). They completed this assessment for 39 different estuaries, from Texas to southwestern Florida.

To assess differences in land use, researcher Sinéad Borchert and her team first used the U.S. Fish and Wildlife Service’s National Wetlands Inventory data to identify coastal wetland habitat. Next, they classified areas of urban development within the projected wetland migration zones using two different datasets: an urban growth model called SLEUTH (Slope, Land use, Excluded, Urban, Transportation, and Hillshade) and the USGS’s National Land Cover Database. Using both habitat and elevation data provides a more accurate prediction of flooding zones at a regional level. Modeling such a comprehensive dataset has rarely been done in the past.

This study reinforces the idea that topography and coastal development dictate the fate of coastal wetland habitat. The results show that low-sloping coastal areas of Louisiana and southern Florida have the highest potential for landward wetland migration. However, wetlands will have to retreat over a larger area to reach higher elevations in these locations.

Urban development in these low-sloping, low-lying areas, such as in Miami, poses the greatest threat to coastal wetlands when sea levels rise. Instead of encouraging wetland growth, we can instead expect areas of high urbanization areas to promote increasing infrastructure development like concrete walls to combat sea level rise. This will result in shoreline “hardening”, or a greater disconnect between coastal wetlands and their upland environment, and ultimately wetland loss.

With the threat of rising sea levels, the need for communication between ecologists, economists, and town planners in coastal communities is more important than ever. This study offers a finer look at areas in the southeastern U.S. that can provide adequate space for coastal wetlands to keep up with sea level rise. It also highlights areas where development will stand in the way of wetland migration - or in other words, potential areas of future wetland loss. Identifying these regions can better direct conservation efforts to places of high priority.

Developing along the coast comes at a great cost in the long term. Losing coastal wetlands means losing ecosystems that protect us from storms, clean our water, and provide habitat for marine species that fishing industries heavily rely on. The results from this study can facilitate more informed and detailed management plans that promote the preservation of coastal wetland migration areas, and ultimately the invaluable ecosystem services that wetlands provide for coastal communities.