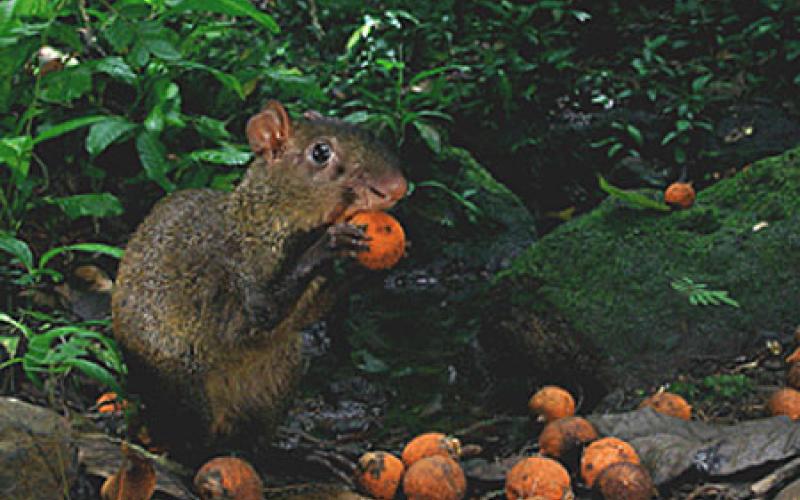 Tropical rainforests are complex and fascinating places. While scientists work slowly to unravel their mysteries, a different kind of unraveling is simultaneously taking place: the fabric of intricate ecological interactions that sustain forest biodiversity. In a novel study conducted in Huai Kha Khaeng (HKK) Wildlife Sanctuary in western Thailand, an international team of researchers tested if overhunting animals that consume wild fruits led to subsequent extinction of tree species that depend on animals to move its seeds. Indeed it did.


Frugivores — such as fruit-eating birds, bats, primates, and deer — are widely hunted across the tropics. Many of these hunted animals perform important ecological functions that help maintain tree diversity, including seed dispersal, or movement of seeds away from the parent plants. Hunting can disrupt these ecological functions with dramatic consequences for forest trees.
When frugivores are hunted out, seeds are not dispersed and instead gather only close to parents and to one another. Theoretically this decreases the survival of individual seeds and may eventually reduce populations of tree species. But whether reduced dispersal actually increased extinction risk of long-lived tree species had never been proven.
This study, published in the Proceedings of the Royal Society B, shows conclusively that the negative effects of increased seed clumping reduces survival at all life stages of some tree species. Using Miliusa horsfieldii, a common plant species in HKK Wildlife Sanctuary, the researchers combined empirical data, statistical modeling, and mathematical simulations to assess whether loss of its animal dispersers would increase chances of Miliusa going extinct.
Over 15 years (1994-2009), 2,049 Miliusa adult individuals were marked, measured, and mapped within a 50-hectare forest plot. More than 1,500 tagged seedlings were censused annually in multiple 3-meter-by-3-meter plots from 2009 to 2011 to record whether they survived. Seed germination rates were also monitored, thus providing growth and survival rates for all life-stages of Miliusa. These field parameters were then input to models that simulated Miliusa population dynamics.
The researchers started with a Bayesian approach — a statistical method that can be used to assess populations in ecology — to estimate the extent to which survival and growth rates of Miliusa seeds, seedlings, juveniles, and adults was reduced when individuals were next to another Miliusa. Next, they used information from the first modeling exercise to check if the plant population decreased over time due to increased gathering of seeds near parents. Then, using an individual based model (IBM), the researchers tracked the spatial patterns in survival of Miliusa individuals over 100 years. At each annual time step of the IBM, three different outputs were noted: population size, Miliusa biomass, and spatial aggregation patterns. This data-based model was compared with a simulated scenario in which seeds did not move beyond parent crowns.
The results showed that when animals are hunted, seeds accumulated near parent trees. Such aggregation increased extinction risk via "density-dependent mortality" — a phenomenon wherein an individual is more likely to die if close to neighbors of the same species. This happens because seed eaters like rodents or infectious agents like insects and fungal pathogens are more likely to find a species' seed or seedling when it is found in larger concentrations, as happenes near parent trees. That's why dispersing away helps.
When seeds remained under parents, the probability of extinction shot up over ten-fold due to increased aggregation of individuals. The researchers found that seed clumping increased mortality at all life-stages. Moving seeds away from parent trees improved survival and growth of new individuals. Even though a Miliusa tree can live for hundreds of years and produce tens of thousands of seeds, unless animal dispersers move these away from parent trees, the species could disappear in 100 years.
This novel analysis shows that disruption of one ecological linkage in a plant's life cycle can have pervasive downstream effects on its population for many years to come. While more tree species will have to be similarly studied to see of these results are widely applicable, this research shows that unchecked hunting in tropical forests can have ripple effects that result in widespread degradation of tropical tree communities.
Read more regarding:
Conservation, Biodiversity & Oceans
Forests
Meghna Krishnadas