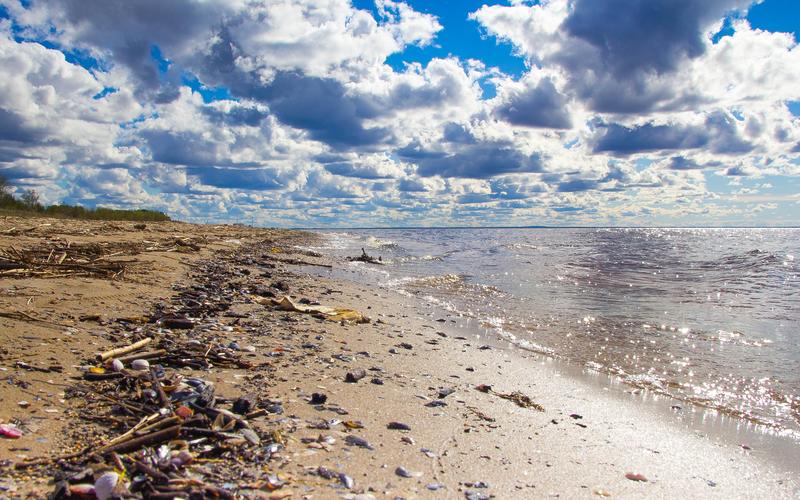 Single-use plastics plague our modern daily lives. They are cheap to produce, convenient, and sanitary — it’s no wonder why we produce a little over 300 million tons of plastic globally every year. However, since most plastics take almost 1000 years to decompose, plastic use has taken an enormous toll on the environment. We certainly can’t kid ourselves into thinking that recycling is a solution to this problem; less than 10% of plastic ends up being recycled. This means that most of our plastic either ends up in landfills or is carried through river systems and ultimately to the open ocean. In fact, a shocking 8 million tons of it ends up in the natural environment each year. That mass is equivalent to over 5,000 blue whales!

Once plastic reaches the ocean, it is subject to waves, winds, and currents that break it down and transport it in various directions. Depending on the size, density, and location of these plastic pieces, they may wash ashore, sink to the ocean floor, or get trapped in oceanic currents. Through a combination of environmental processes, circulating ocean currents form massive vortexes called gyres. Since the rise of plastic production, gyres have become garbage hotspots for the accumulation of marine debris. This problem is more than just an unsightly collection of trash. The persistence of plastics of all sizes in the ocean has detrimental effects on entire food webs of marine and land species.

A problem is that these trash accumulation zones are quite difficult to quantify, due to their sheer volume and the size range of the plastics within them. In a recent study from Scientific Reports, a group of researchers led by Laurent Lebreton provides the most detailed estimates of the current size and composition of The Great Pacific Garbage Patch (GPGP), a massive marine debris accumulation zone in the North Pacific Ocean. They aimed to conduct a large-scale field monitoring effort to better understand the density and type of marine debris in and around the GPGP, and to incorporate these data into a detailed model to predict its size and movement.

From 2015 to 2016, the team launched a large-scale, multi-vessel survey through the GPGP. A fleet of 18 vessels trawled a total of 652 nets across the ocean surface over the course of three months, hoping to collect a range of plastic sizes and identify their origin and age. After capture, researchers sorted samples by size class and material type. For several samples, the team was able to identify a language and manufacturing date. Of these samples, one third of the labels had Japanese inscriptions, and one third Chinese—an important reminder that plastic pollution is a global problem.

To supplement field collections, the team conducted aerial surveys by deploying two low-flying planes over the GPGP. This method allowed them to locate and identify larger pieces of plastic that their nets couldn’t capture (typically plastics larger than 0.5 meters). They incorporated this data into a model aimed at helping them understand how the GPGP has moved in position and increased in size over time.

The model shows that sea surface currents are the most important factor in driving trash to the GPGP. This means that while other environmental drivers such as wind and waves might play a small role in moving trash across the ocean, their real power is in washing trash ashore, pulling trash offshore, or breaking it down.

Overall, researchers estimated the GPGP to be 1.6 million km2—more than twice the size of Texas. Over the past 40 years, the rate of plastic accumulation has increased exponentially. Of the marine debris collected, 99.9% were plastics. Nets, ropes, and lines used for fisheries and the marine industry composed 52% of the GPGP by mass. Because fishing gear is designed for durability in marine environments, it is typically made of very rigid plastics called polyethylene and polypropylene. These plastics are incredibly resistant to degradation over long periods of time. As increasing populations, development, and income are projected to intensify the fishing industry, better accountability and management of gear in commercial fishing is imperative.

The persistence of plastic waste in our oceans can have harmful effects on habitat quality and human health. Over time, larger pieces of plastic within the GPGP break down into smaller pieces, become suspended in the water column, or sink to the ocean floor. Marine organisms or seabirds often ingest these plastics by mistaking them for food, not realizing that they are indigestible and have no nutritional value. Even the most microscopic pieces of plastic cause serious problems in the marine environment. Through a process called bioaccumulation, microplastics accumulate within organisms and make their way through the marine food chain. Eventually, those plastics can end up on our plates. This disturbing reality is already having major impacts on food safety and the fishing industry.

Understanding the size, growth rate, and composition of the GPGP should alert communities and nations worldwide to more efficiently manage their waste, while incentivizing a reduction in plastic production. Additionally, these results provide a call to action for policy changes around plastic use in the fishing industry. It is also essential that behavioral changes around single-use plastic happen at the consumer level. Reduce, reuse, and refuse plastic — the health of our oceans is a global responsibility, and its protection depends on support from individuals to governments.