Fungus in the forest: How pathogens drive rainforest diversity 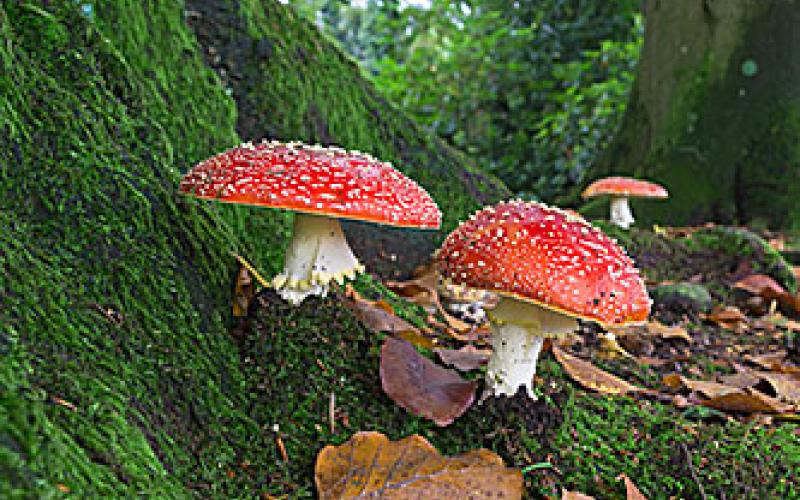 Ecologists are fascinated by why rainforests have so many tree species. Particularly puzzling is why one or a few species do not outcompete all others and take up all the resources and available space. Instead, rainforests contain many rare species, sometimes with up to 1,100 species coexisting on a single hectare. How such small populations of rare species persist over long periods, and how these communities change over time, remain open to ecological inquiry.


Now, it appears that fungi and insects may be the crucial players driving this phenomenon. Yes, fungi. Non-descript tiny organisms that can be so easy to miss on a forest hike. In a recent study conducted in a rainforest in Belize and published in the journal Nature, a team of researchers led by Owen Lewis from Oxford University and Robert Bagchi from ETH Zurich have conclusively proven that fungi mediate how many different species coexist. "It's astonishing to see microscopic fungi having such a profound effect on entire rainforests," said Lewis. These results provide empirical support to a long-standing proposition regarding species coexistence in hyper-diverse plant communities.
Past ecological research theorized that with larger collections, or high densities, of seeds or seedlings of the same kind, each individual has a lower chance of survival. Or, as Lewis stated, "In the plant world, close relatives make bad neighbors." This is because seedlings have a higher chance of being eaten by an herbivore or infested by a pathogen that attacks their kind when surrounded by similar neighbors. Now, if mortality is highest where a species is aggregated, it opens up space for other species to colonize these areas and — voila! – you have local diversity.
While it has long been believed that pathogens like insects and fungi specific to different host plants were responsible for killing them at high densities, it had been difficult to test. Now, in an elegantly designed experiment in the Chiquibul Forest Reserve (Belize), Robert Bagchi and team prove conclusively that host-specific insects and fungi are indeed prime agents of seed and seedling mortality, and their effect intensifies as densities of host clumps increase. Bagchi, the first author of the study, said, "Providing experimental evidence that this in fact leads to higher diversity among rainforest plant communities — that is an exciting step forward."
More infection, more diversity
In this study, the researchers sprayed insecticides and fungicides into marked one-square-meter plots in which seed-fall was recorded. In adjacent seedling plots they recorded recruitment. They also had adjacent control plots sprayed with water only. Essentially, the researchers were evaluating the effect on seedling diversity if pathogens are not at work killing the more abundant species and opening up opportunities for the rarer ones to establish. The answer was a resounding yes.
Removing fungi resulted in the near disappearance of seedling mortality due to high density, and reduced diversity. In contrast, insecticide drastically modified species composition, but did not alter diversity. This is a critical insight because it shows for the first time that different agents of seed and seedling mortality may be influencing distinct aspects of rainforest plant diversity.
This understanding has implications for conserving tropical forest diversity. With changing climate altering rainfall, the number or types of fungi typically found in wet, warm conditions might change. And "without fungi to keep [some] species in check, we could lose the diversity that makes rainforests so special" said Bagchi. However, he suggests caution in overstating its interpretation for conservation, since the study was conducted at a single site over a short time-scale of 17 months. These findings need to be tested in different forests to be confident of its generality and overall importance.
To better predict the impacts of climate change on biodiversity persistence, scientists must now explore and understand these lesser known interactions in ecosystems around the world.
Read more regarding:
Conservation, Biodiversity & Oceans
Forests
Meghna Krishnadas