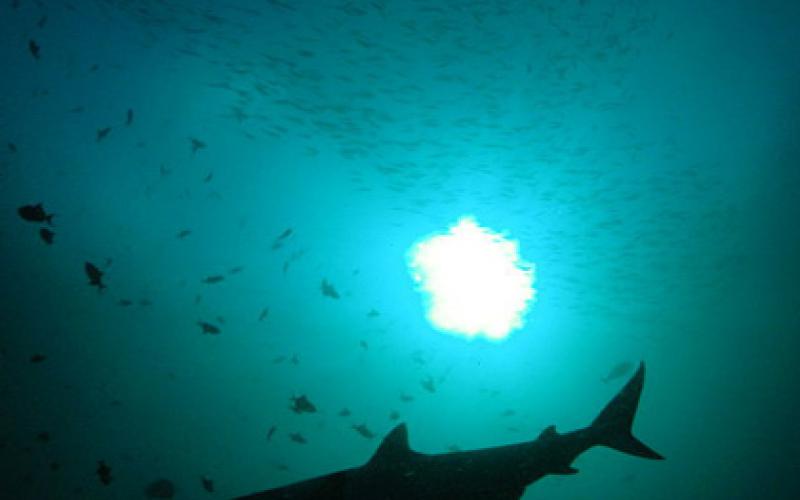 Sharks and other cartilaginous fishes (i.e., rays, skates, and chimaeras), hereafter simply referred to as 'sharks', have been living in our oceans for over 400 million years. This makes them some of the world's oldest living vertebrate species. In comparison, Tyrannosaurus Rex lived around 67 million years ago. Within the last few decades, many shark populations have declined, mostly due to the rising demand for shark products, such as shark fins and meat, as well as the appearance of advanced fishing technologies in several gear types (i.e., longlines, purse seines, and gillnets).  The situation is aggravated due to the poor representation of sharks in most fisheries management plans, unreliable data on landings, catches, and global trade in fins, and a lack of political will and resources to conserve these vulnerable species. The International Union for the Conservation of Nature (IUCN) categorizes more than half of global shark species as threatened, vulnerable, or endangered to extinction.

The only international framework for conserving and managing sharks is the International Plan of Action for the Conservation and Management of Sharks (IPOA-sharks), developed and implemented by the United Nations Food and Agriculture Organization (FAO) in 1999. The plan provides guidelines to improve data collection and research, to identify priority species for conservation, and to develop and implement initiatives for education outreach and collaborative consultation. Although this framework is non-binding and ill-enforced, individual countries are strongly encouraged to develop National Plans of Actions (NPOAs). Today, not all countries have adopted NPOAs and most existing plans fall short in following the FAO guidelines, according to a recent article in Marine Policy by researchers from Dalhousie University.

The researchers reviewed Canada's 2007 NPOA for its overall effectiveness towards reducing total shark mortality in the Pacific, Arctic, and Atlantic Oceans, and compared it to Australia's NPOA. They found that Canada, although recognized as a leader in shark management, lacks firm commitments to sustainably manage non-commercial shark species, and other cartilaginous fishes.  While Canada's NPOA includes data on commercial shark species, it runs short in describing and addressing the threats to non-commercial species from bycatch. This warrants attention particularly because the role of Canada – and several other countries – in depleting shark populations, as a result of shark bycatch and discarding at sea. Canada's NPOA is currently under revision (plans should be revised every four years), which provides the opportunity to learn from countries that have followed the FAO guidelines more closely, like Australia. This includes comprehensive bycatch management plans, best handling practices, increased observer reporting, and improved surveillance options. Similar measures should be adopted in Canada's revised plan, so that the country can once again be considered a leader in shark management and conservation.

Several management tools used to reduce shark mortality are becoming increasingly popular. Spatial and temporal protected areas can minimize bycatch of sensitive species. Shark fin bans, and the adoption of bycatch mitigation techniques in high catch fisheries can help reduce waste and incidental catches. For example, the authors state the protection of an area identified as a potential nursery ground for the endangered porbeagle shark in the Grand Banks, off Newfoundland, may be essential for rebuilding the regional population. The proposed area could be declared as a no shark-fishing zone during the summer months when porbeagle sharks mate. Another management tool is setting quotas on bycatch. The U.S. and New Zealand developed such mechanisms for sea turtle and sea lion bycatch, respectively. Once a defined quota is reached, the fishery is closed for the season. This encourages less impactful fishing methods. Another approach to incentivize better fishing techniques is to place taxes on bycatch. Both quotas and taxes on bycatch require sophisticated monitoring mechanisms like video surveillance on fishing boats to enhance compliance. Including sharks into innovative management frameworks and adopting proper tools to effectively implement measures outlined in NPOAs is necessary to ensuring the survival of endangered species.

Developing NPOAs that closely follow FAO guidelines, and plans that are revised at least every four years, can be a powerful tool for sustainably managing shark populations. Most countries have not taken adequate actions, including Canada. Political will and concerted efforts of all countries are therefore required to reverse the trend of rapidly declining shark populations. Particularly important are key policies that improve data collection and research, manage bycatch, educate fishermen on species identification and handling practices, and foster coordination with stakeholders. Adopting management tools as seen in other fisheries is long overdue to achieve stable shark populations, and merits more attention from both researchers and policy-makers.