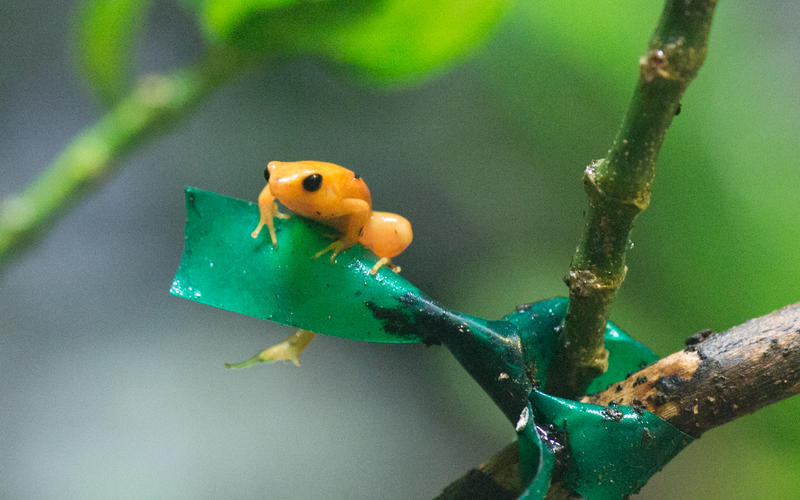 Around the world, diseases are threatening amphibians like frogs and salamanders. As a result of this, many species are already extinct in the wild. With no solution in sight, scientists are scrambling to address local conservation challenges that must be solved before tackling amphibian protection on a global scale.

One of these local problems is ensuring the health of endangered frogs that are already kept in captivity. Picture a frog, one with slick, bright orange skin: the Golden Mantella Frog. Now, imagine that your eye is like a microscope, and you can zoom in until even the smallest things come into focus. On the frog’s skin, you can see it is covered in naturally-occurring bacteria, which are living harmoniously with the frog.

This relationship between a frog and bacteria that live on its skin is called symbiosis, or more specifically, mutualism: two living things benefiting each other. Bacteria benefit because the frog provides nutrients and a place to live. The frog benefits because skin bacteria can be the first defensive line against disease or infection, potentially crucial in determining whether a frog survives or perishes.

When particularly deadly diseases strike vulnerable frog populations, scientists sometimes have no choice but to conserve species through captive breeding—a process that takes frogs from the wild to breed them in a zoo. Keeping endangered frogs behind glass may be the only chance to save a species for the future, as many diseases will wipe out wild populations completely. Scientists hope that zoos can keep these frogs alive in captivity long enough for deadly diseases to disappear from the environment, but if this does not happen, many of these species may be resigned to a permanent life in a tank.

In addition, a captive-bred existence may actually make frogs more prone to contracting diseases. Researchers predicted that captive-bred frogs would have less skin bacteria because they are kept in a cleaned zoo environment and seldomly interact with other individuals, weakening their bodies’ first line of defense.

In a recent study from the journal PLOS One, Drs. Passos, Garcia, and Robert examined the differences in skin bacteria between three Golden Mantella Frog populations, a critically endangered species that is native to Madagascar. Two of the populations were found in the wild, while one was captive-bred. The scientists swabbed eight individuals from the three populations, to collect samples of each frog’s skin bacteria for analysis.

The researchers found that the skin of captive-bred frogs possessed fewer bacteria, as well as a lower diversity of bacteria, compared to wild frogs. This might decrease the ability of these frogs to fight off new diseases, which could further endanger them if they were released back into the wild.

Let’s return our focus to the bright orange skin of the Golden Mantella frog. Imagine now that you are using your microscope eye to zoom in on a captive-bred individual, and you barely see any bacteria. Without this important symbiotic relationship, this frog might struggle to survive in the wild. Scientists depend on captive breeding so that they can someday reintroduce frogs into their home environments, but if captive-bred frogs are not equipped to fight off disease, reintroduction plans and future frog conservation efforts could be ruined. The decline in frog skin bacteria could be yet another hurdle in a global amphibian conservation strategy fraught with complications.