Can an invasive species actually help lemurs in Madagascar? 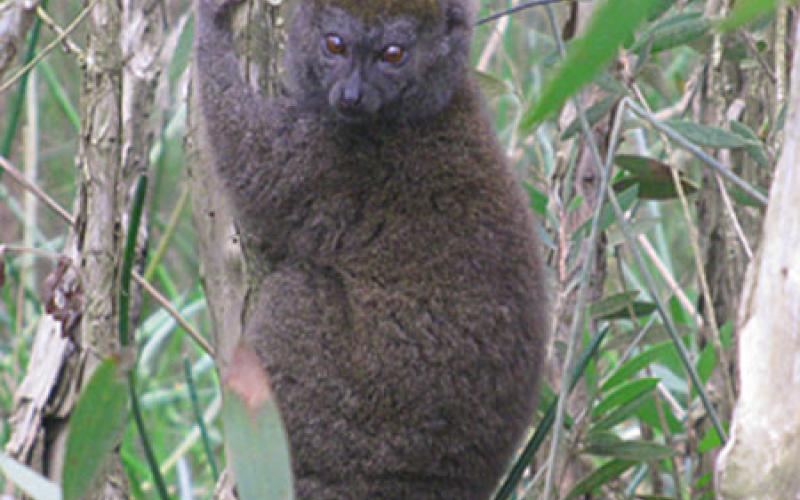 Tropical forests around the world are in serious danger. With the continued loss of tropical forests due to deforestation, timber harvest, and cultivation, wildlife that relies on these forests are threatened with the risk of extinction. In Madagascar, forests are being destroyed and fragments of forest are proving to be unfit habitats for supporting a variety of species. If these fragments are not connected, the absence of gene flow between populations of the same species may induce greater extinction risk. Exotic species, or those not originally found in a specific area, are also potential threats to tropical plant species, competing for light, nutrients, and other resources. Forest fragmentation opens up space for exotic species to invade, further degrading the habitat and threatening the well being of forest fauna. While forest fragmentation in Madagascar has been shown to threaten several of the island's wildlife species, little is known about the effect of the invasive plant, Melaleuca quinquenervia, also known as the paperbark, on the southern bamboo lemur. A recent study published in the online journal PLoS ONE assesses how the southern bamboo lemur uses habitats that have been invaded by M. quinquenervia, and the plant's potential to act as a connection between forest fragments.

Along the southeastern coast of Madagascar, researchers from the University of Hamburg in Germany and Oxford Brookes University in the UK have been working with a species of bamboo lemur to better understand how they cope within an anthropogenically fragmented landscape. They sought to explore this topic in the Mandena Conservation Zone, a protected area comprised of a matrix of three different habitats, including littoral forest, littoral swamp, and Melaleuca swamp. For comparison, they recorded canopy cover, the diversity of plant species, and the vegetation structure for each habitat type. Radio collars were then attached to 10 individual southern bamboo lemurs in each of four different groups to record the amount of time each group spent in a certain habitat type. Within each habitat, the researchers conducted behavior data, noting the activities, time spent, and food items consumed. Statistical tests were performed to determine whether lemur activities differed in each habitat type.


The diversity of species differed greatly between the three types of habitats. M. quinquenervia swamps had a total of six plant species, while the littoral swamps and forests had 49 and 84 species, respectively. Despite this drastic difference in species composition, the southern bamboo lemurs were found to use M. quinquenervia swamp habitats considerably. There was no significant difference in the amount of time the lemurs spent resting, feeding, or travelling in M. quinquenervia swamps. In fact, temperature, precipitation, and day length had a greater influence on the behavioral activities of the lemurs than the habitat type. Some groups were even observed consuming the flowers of the invasive species. This is significant because it contradicts the previously accepted idea that exotic plant species change the behavior of wildlife species and can disrupt the native ecological systems.

This study finds that the type of habitat and vegetation that it was composed of was not a significant predictor of where the lemurs could be found. The growth of invasive M. quinquenervia was not found to pose a severe risk to the lemurs' survival, although more research is needed. In this study, it was found to be beneficial in connecting forest fragments, acting as corridors for lemur dispersal. While it is not the ideal habitat due to the homogeneity of plant species and lack of diverse resources offered, lemurs did not seem to avoid M. quinquenervia swamps. Similarly, their behaviors and activities while using the swamp habitats were not changed. It was also found that local communities could use the exotic species as timber and fuel wood, reducing stress on the remaining native fauna.

With increasing demand for forest resources causing deforestation and land clearance, fragmentation of habitats and invasion of exotic species is a serious threat to tropical forest ecosystems. This project, as well as others, have documented the potential for forest composed of exotic species to provide habitat for native wildlife species. Invasive and exotic species are deemed harmful to the native flora and fauna. In this case, the southern bamboo lemurs found some benefit from it, at least in the short term.

Since lemurs are important seed dispersers and pollinators in Madagascar forests, their survival is critical for the persistence of such a unique ecosystem. Considering the alternatives of land clearing and cultivation, a habitat of exotic species can be temporarily more useful to wildlife while other habitat restoration efforts are in place. The importance of connecting fragments is highlighted in this research. A new look at how the invasion of exotic plant species can act as a short term solution to conserving endemic wildlife provides new hope for the future of primate conservation.
Read more regarding:
Conservation, Biodiversity & Oceans
Forests
Land Management & Land Use
Kira McCall