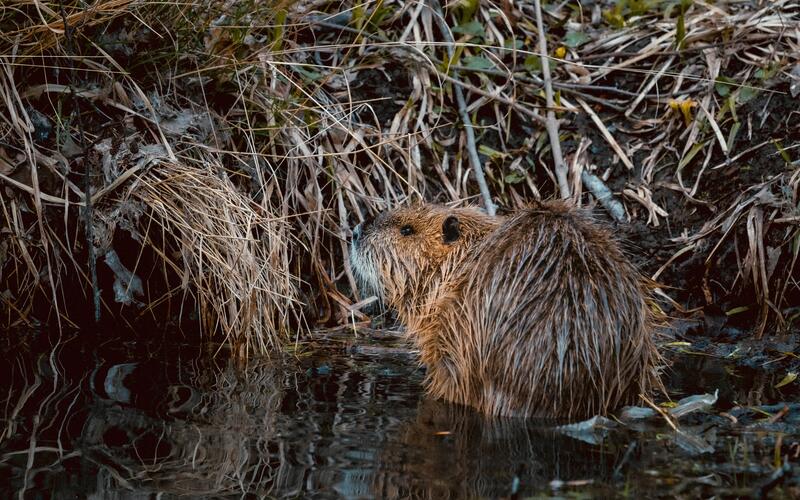 There are two species that have fundamentally changed rivers in the United States: humans and beavers.  Beavers are an integral force in shaping the ecosystems around them. Their dams may not look like more than an impressive mound of gnawed sticks, twigs, and logs, but in reality, they provide a long list of benefits to both their immediate surroundings and to humans downstream.

Despite the value beavers have to the wellbeing of both humans and ecosystems, they nearly went extinct in the first half of the twentieth century due to the fur trade. Today, their numbers have recovered back to 10 million, but the decades of beaver losses have greatly impacted ecosystems and the benefits they provide.

Beavers can dramatically alter the flow of rivers in three main ways: slowing water behind their dams, engineering ponds and new channels, and creating wetlands of stagnant water. With the variety of river flows created by beavers, a diversity of habitats is created that can support many different species of plants and animals. These changes are the kinds of benefits that scientific studies traditionally note—the services that beavers provide to nature itself. Scientists have recently, however, been considering beaver benefits more broadly in terms of benefits to humans and economies.

A recent study conducted by researchers from the University of Helsinki found that beavers provide services worth $1.6 to as much as 133 million to humans through the various ways in which they modify the environment. Understanding the value of these services could help the public and policymakers understand the outsized benefits of these small, flat-tailed mammals.

To make those calculations, the researchers combined previous studies about how different aspects of wetlands – such as water purification or recreation – might  be valued, and research about geographic area that the current beaver population might impact. For example, while the value of wetlands is well understood, the contribution of beavers to wetlands or area of wetlands they influence has not been well quantified. With this information, the researchers were able to calculate how much of those benefits might be provided by beavers and create a per-hectare service value.

The researchers categorized these benefits into three bins: regulating, provisioning, and cultural. For every hectare – or about 2.5 football fields – per year, beavers provide the following services: regulating services, such as diminishing flood intensity (valued at $124 ha/yr); filtering water for $108; and capturing greenhouse gases for $75. These benefits are all actualized by slowing the waterflow. In the provisioning category, beaver dams also slow down water and allow it to drain into groundwater reservoirs. This groundwater recharge process provides fresh drinking water valued at $77 and rich habitats for $133.  Lastly, the habitats created by beavers provide opportunities for humans to bird watch and recreate, which are forms of cultural value, estimated at $167.

Multiply all those values by the estimated beaver range in Northern Hemisphere—around 1 million hectares per year— and you’ll find that beavers have the capacity to provide upwards of half a billion dollars of value in ecosystem services. Imagine how many people you would have to hire to provide those kinds of services.

While beavers offer far more than just a dollar value, thinking in monetary terms can help motivate policymakers, managers, and the public to support beaver restoration efforts and healthy populations. We so often think we can engineer our way out of these challenges, like costly dams and diversions, but beaver services are free.