Alaskan Salmon are shrinking. Why does this matter? 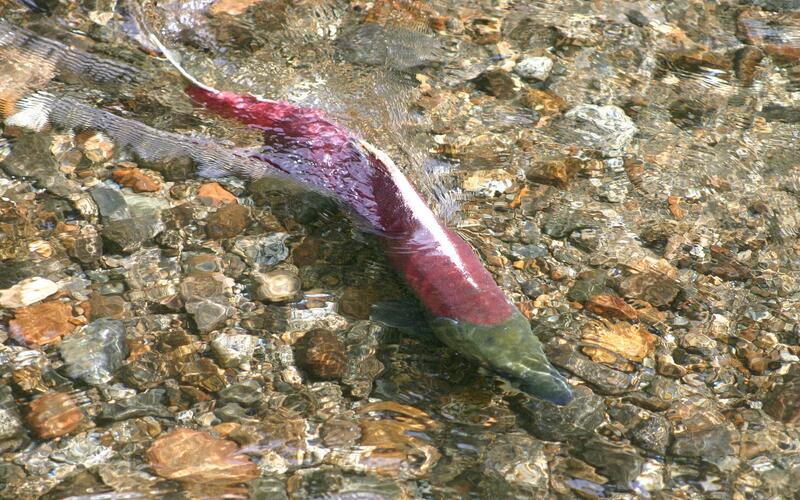 Image by schucke from Pixabay

Alaska is home to one of the last and largest intact salmon fisheries in the world. These salmon have managed to escape pressures like over-harvesting and habitat loss that have decimated other fisheries. Alaskan salmon are an integral part of local economies, ecosystems, and Indigenous culture. Despite the balance that has existed between the fishery’s health and people’s needs, local and Indigenous communities are finding that salmon have become smaller in size over the past few decades.

The reasons for this change are not well understood, yet a decrease in salmon size can have far-reaching consequences for both people and ecosystems. Smaller salmon produce fewer offspring, transport less marine-derived nutrients, threaten the food security of rural, salmon-dependent communities, and result in profit losses for commercial fisheries.

In a recent study published in Nature Communications, Dr. Krista Oke and her colleagues measured the magnitude of salmon size declines across Chinook, Coho, Chum, and Sockeye salmon species in Alaska. They also investigated potential causes of the size reductions and quantified the impacts of these changes for ecosystems and people.

The authors compiled fish size and age measurements to compare mean body length prior to 1990 to mean body length after 2010, and determine changes in the ages of adults returning to spawn. To evaluate the hypothesized causes of salmon size declines, they created models to predict the effects of climate and competition on changes in size over time. The researchers also used change in fish size to estimate change in fertility, nutrient transport, human nutrition, and commercial value.

Many different climatic and competition metrics were associated with size declines and depended on the species. For example, the North Pacific Gyre Oscillation has been linked to chum salmon size declines and sockeye salmon size decreased as North Pacific Pink salmon abundance increased. For Chinook salmon, many factors had moderate contributions to body size. However, most importantly, at least one climate and one competition metric were associated with body size declines in all species.

This study not only confirms that Alaskan salmon are becoming smaller, but also demonstrates that maintenance of body size is critical for healthy fisheries, communities, and ecosystems. Moreover, it indicates that a combination of competition and climatic factors may be causing these size declines. While ecosystem managers cannot control climatic factors, they can control competition between species. Currently about 5 billion hatchery salmon are released into the North Pacific each year; moving forward, it will be critical to develop tools that help fishery managers understand how releasing one species may impact the size and productivity of another.