Navigating the warp and weft of time: Natural indigo dyeing in Yunnan 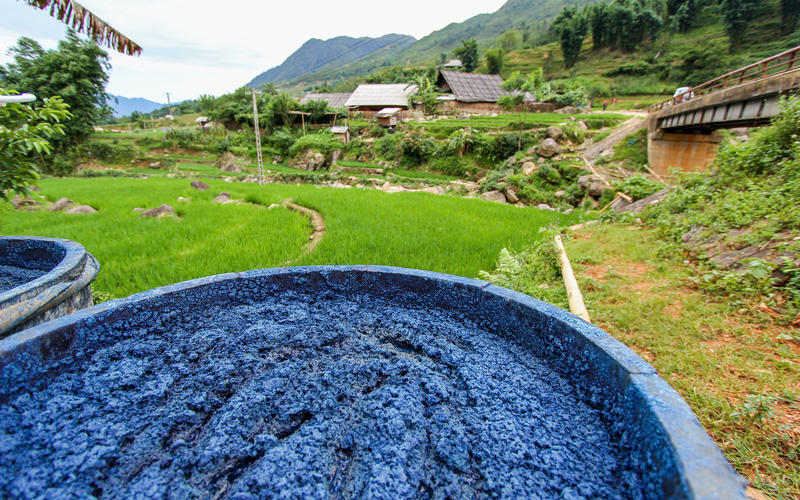 How does an unassuming green leaf produce a brilliant shade of indigo blue? The transformation of green to blue may seem like a process that requires complicated experiments in a chemistry lab, but it’s a process that communities across the world have known for centuries.

In fact, even before contemporary globalization, ancient civilizations had harvested plants to create beautiful blue dyes; from the Mayans, to the Egyptians, to the Japanese. Stories of indigo are woven into the collective memories of communities across many countries. A community in Yunnan, China, has its own stories of indigo. The community’s name, ‘Landian Yao,’ translates to ‘blue clothes Yao,’ which shows how central indigo has been to the cultural identity of the people.

A group of researchers at the Chinese Academy of Sciences sought to document the way that the Landian Yao make indigo dye. They also identified 12 plant species that were previously not known to be components of the indigo dyeing process.

They found that the Chinese Rain Bell is the main source of indigo pigment in the region. To extract indigo pigment from this herbaceous plant, local dyers collect and ferment its leaves in water until the water turns a blue-green color. Next, they add lime, vigorously stirring until it turns a deeper shade of blue. Some dyers may taste the liquid at this stage to check if it has become slightly spicy, indicating its readiness for the next stage. This liquid is transferred to a large vat, and an indigo paste gradually forms as a precipitate at the bottom the vat. The paste is removed from the vat and is ready to be used as a dye.

During the process of dyeing cloth, up to 14 other plants may be added to the indigo pigment to make it soluble in water, obtain the desired hue of indigo, and ensure resistance to fading. For example, the addition of Dyeing Yam can make it a darker shade of indigo, closer to black, while Herbst’s bloodleaf gives it a red tinge.

Traditionally the Landian Yao would carry out this process twice a year, based on the lunar calendar. Over time, however, interest in producing indigo has waned, in part because of a shift in clothing preferences away from traditional garments and partly because it is time-consuming. In this context, documenting traditional indigo dyeing processes can preserve a link with history that might otherwise be lost and support the search for synthetic dye alternatives. As the popularity of sustainable fashion grows globally, perhaps we can also look back to look forward.