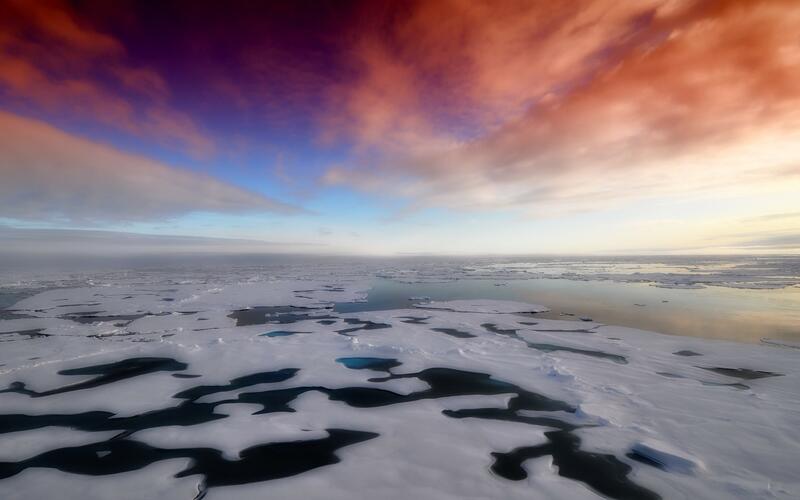 Shea, N. (2019, May 8). Scenes from the new Cold War unfolding at the top of the world. National Geographic. https://www.nationalgeographic.com/environment/2018/10/new-cold-war-brews-as-arctic-ice-melts/#close

Years from now, Dr. Janin Schaffer will remember the sound of ice cracking and colliding. The force of these impacts created ridges in the “white plain” of Arctic ice where her ship, the Polarstern, was anchored.

In October 2020, the Polarstern returned from a year lodged in an Arctic ice floe, where Dr. Schaffer and her fellow expeditioners with MOSAiC studied the Arctic ocean and climate. Dr. Schaffer describes the Arctic as a “region [previously] without measure.” Data collected on the expedition will answer key uncertainties about the role of the Arctic in global climate change. As the Ocean Team Lead, Dr. Schaffer’s research focused specifically on ocean circulation and the exchange of heat between the ocean and atmosphere.

In the Arctic, the ocean is vastly warmer than the atmosphere. A layer of ice shields the “warm” -2°C water from the chill of the -40°C air. With the right amount of pressure and wind, a system of cracks, called leads, can form in the ice. These leads allow heat from the ocean to escape to the atmosphere and cause wind to stir up the exposed water. Dr. Schaffer and her team aimed to measure exactly how much heat escapes from the ocean and to investigate the effect of this process on the mixing of ocean layers.

Tracking the exchange of heat between the ocean and the atmosphere helps scientists understand how weather events form within and beyond the Arctic. According to Dr. Schaffer, while her team “studied turbulence in the ocean, [another team] studied turbulence in the atmosphere.” Together, their research will help fill in the “black hole” of unrecorded Arctic data that plagues global climate science.

Dr. Schaffer’s data will also be used to generate formulas intended to improve global climate change models. Ideally, these models will inform scientifically-driven decisions for the management of a rapidly warming Arctic region. Current projections indicate that Arctic summers may be entirely free of ice by the next century. The retreat of this ice would allow previously unreachable natural resources, including fossil fuels, to be accessed for the first time. Global policymakers have already begun to weigh the costs and benefits of exploiting these resources, as the region becomes increasingly important to global geopolitics.

In September 2020, the coverage of Arctic sea ice receded just shy of a record low. As a result, the team faced unexpected difficulty in finding an ice floe stable enough to make camp. The thickness of the remaining ice also posed a challenge. Dr. Schaffer recalled, “When [the first team] started, the [ice] thickness was 80 centimeters. When we got there [in the Spring], it was 16.” Dr. Schaffer noted that inevitably, the team had to abandon a few projects as breaking ice became unsuitable for work.

The most unprecedented obstacle to the expedition however, reached them just before the third leg of the trip. By then, the brewing coronavirus pandemic had bubbled over, and the MOSAiC team rushed to make new plans for resupply and staff switches amid global travel restrictions.

The pandemic required a phenomenal degree of flexibility and international cooperation to save the otherwise meticulously planned expedition. However, the team’s isolation in the Arctic did award them a few freedoms. On the ship, Dr. Schaffer was able to celebrate the coming of spring with the traditional dance, “Tanz in den Mai,” while friends at home in Germany self-isolated.

MOSAiC will make its data publicly available by 2023, providing decision makers with the information they need to navigate a rapidly changing and uncertain world. But perhaps the most important finding MOSAiC can share is one they never intended to measure: rapidly accelerating changes in the global environment— from the pandemic to climate change—pose unprecedented challenges for scientific research. To meet these challenges, researchers must become more adaptable than ever before.