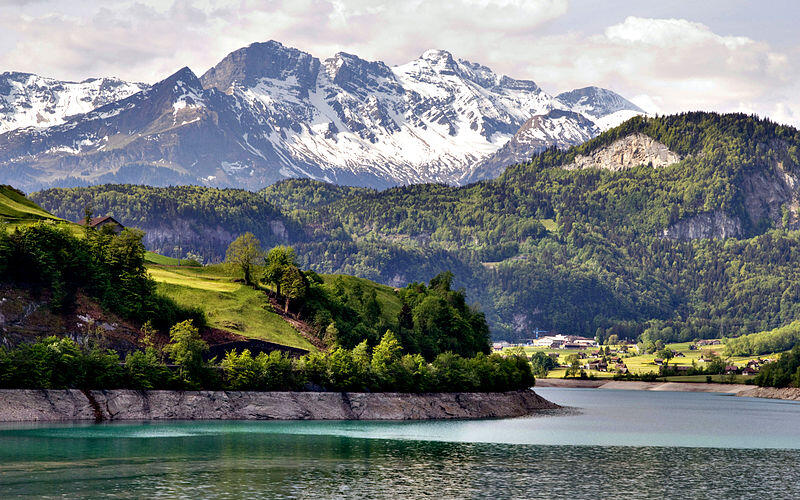 Known as the “Water Towers of Europe”, the Alps mountain range supplies water to 170 million people living in the watersheds of 4 major rivers. Droughts are becoming more frequent in the region, likely driven by climate change, and are causing increased water scarcity. The heat waves and droughts experienced by Europe in 2003, 2010, 2015, and 2018 have caused concerns about water vulnerability and its impacts on both people and the economics of the region.

Climate change is already altering long-term precipitation patterns in Central Europe. Summer precipitation in the region has decreased and is projected to continue decreasing in the future. By using data from the 2003 heatwaves, scientists are now modeling future changes under different climate change scenarios. Their results show that a 3 degree Celsius increase in temperature would cause the same water scarcity as a 3 percent decrease in precipitation.

At first glance, an observer might think the Alps have abundant water, with lush green hillsides and gushing rivers. This idea of a “drought paradox”, where droughts happen in areas that seem water rich, was investigated in a new study published in Nature Climate Change by Mastrotheodoros and colleagues. To model future changes in water availability, the researchers separated flows into green and blue water. Blue water flows over land into streams and is readily accessible for human consumption. Green water is absorbed by the soil, taken up by plants, and is not available for domestic use.

Mountainous regions are difficult to study on a large scale because their slope and vegetation varies so much with elevation, and it can be difficult to accurately estimate water supplies. Mastrotheodoros and colleagues’ new model to study the Alps resolves many of these challenges to show that the region may be vulnerable to water scarcity even if the mountains look lush.

Supplies are influenced by various inputs and losses. Some water is directly lost to the atmosphere through evaporation, while plants also indirectly loose water through transpiration. As the earth warms, plants are transpiring more, and evaporation is increasing. Melting snow leads to more even more evaporation, whereas reduced rainfall is drying out mountain slopes. Additionally, runoff from the mountains is primarily supplying water to the vegetation on the hill instead of flowing into the rivers and lakes below, which means that the hill looks green without much water reaching the people at the bottom. These processes during the European heatwaves of summer 2003, for example, caused the region to see increased evapotranspiration and lower precipitation which reduced blue water availability by 30 percent.

Further understanding of water flows in the Alps is vital for managing the water supply of millions of people. Higher evapotranspiration will continue to support green slopes and cause drier rivers. The increase in surface runoff that results from melting glaciers will only provide temporary respite. Decreases in precipitation and increases in evapotranspiration will continue to put more people in the region at a water risk. The researchers’ methodologies present a blueprint for understanding water flows in other mountainous regions and river systems around the world.