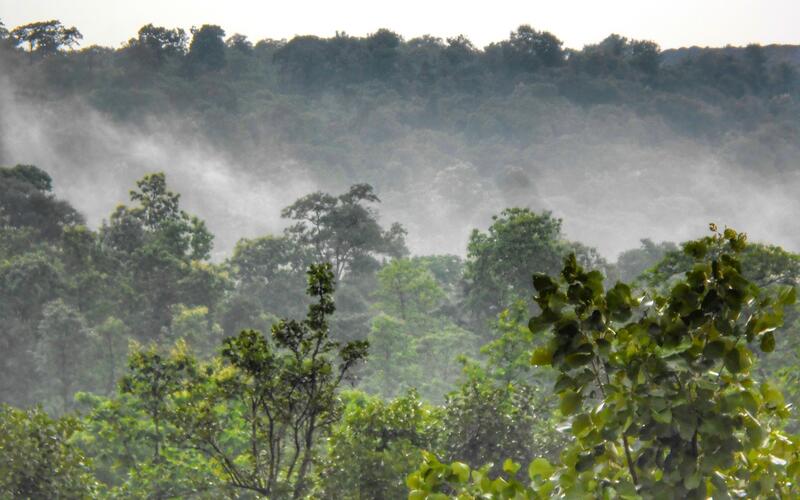 The words ‘tropical forest’ probably conjure up images of a lush, humid rainforest teeming with plants and animals through the year. Instead, picture a forest that has two seasons. A long dry season, often accompanied by scorching heat, followed by a few months of rainfall. Forest canopies open and close with the seasons and alternating cycles of dry heat and rain. In the dry months, leaves fall off trees, allowing the sunlight to reach the ground. Rainfall brings this period of dormancy to an end and leaves gradually grow back. These are tropical forests too – tropical dry forests.

Data on the extent of global deforestation suggest that tropical dry forests are among the most threatened regions in the world. Ironically, these forests are often overlooked while creating protected areas because rainforests support more species and have higher carbon stocks. However, conserving dry forests can protect thousands of species that are only found in these regions and have unique adaptations to cycles of rain and drought. These forests also provide millions of people with food, medicines, and livelihoods.

Tropical dry forests experience a dry season that lasts from five to eight months, and an average rainfall of 2-5 feet each year. In extreme cases, the amount of rainfall may vary from over eight feet in some months to none at all in others. Over 30 percent of tropical forests are classified as dry forests and they are found in most countries around the equator. Well known examples include the Caatinga and Chaco regions in South America, the miombo forests in Africa, and the dry forests of central India and Indochina in Asia.

Plants and animals that inhabit these areas have unique characteristics that help them adapt to contrasting extremes. For example, deciduous trees like teak and mountain ebony shed their leaves in the dry season to conserve water. Orchids store enough water in their stems to last through the dry season. Certain insects burrow into the ground and lie dormant till the rains return, and animals like howler monkeys change their diets as the seasons change.

In a study published in the journal Science, Karina Banda and her colleagues found an astonishing diversity of trees in tropical dry forests in the Americas. These regions are home to close to 7,000 species of trees, shrubs and vines, many of which are unique to the region. The researchers identified 12 distinct areas on the basis of vegetation and found over 1000 plant species in large contiguous areas, such as those in central and northeastern Brazil and Mexico. While a few tree species such as the West Indian elm and the iguana hackberry are found across a number of these forests, several are only found only in one region. For example, as many as 73 percent of the species in Mexican dry forests are only found there. If deforestation continues at current levels, failing to protect these regions could lead to the loss of these unique species.

Data on trends in global deforestation published by Matthew Hansen and his colleagues, also in Science, suggest that the tropics have experienced the greatest amount of deforestation in the 21st century, among the major climatic domains. Within the tropics, the dry forests of South America have experienced the highest rate of forest loss largely because of agriculture driven deforestation in the Chaco woodlands. Over the last three decades approximately 20 percent of this 250,000 square mile region spread across Argentina, Paraguay, and Bolivia has been lost to deforestation, driven by an increase in large scale soy production and livestock farming.

Dry forests are attractive to farmers because they have soil that is fertile enough for agriculture and a long dry season can suppress weeds, pests, and the regeneration of vegetation. They can also be cleared more easily than rainforests, through the use of fire, making these forest lands easier to access for subsistence or commercial scale agriculture and livestock farming. In fact, ancient civilizations have settled and grown around these forests for thousands of years, including pre-Columbian civilizations in Peru and Mexico. Even today, dry forests can be surrounded by densely populated areas. For example, over 100 million people live in and around the miombo forests covering a large stretch from Angola to Tanzania in central-southern Africa. People depend on these forests for energy, timber, and non-timber forest products.

Research on tropical dry forests has been limited, possibly shaped by global funding priorities in the natural and social sciences. According to a study by Kayla Stan and Arturo Sánchez-Azofeifa published in the journal Forests, between 2005 and 2018, approximately 75 percent of articles on tropical forests focused on rainforests, and only 25 percent were on dry forests. This means that there is less information on biodiversity and human-forest interactions in and around these regions.

Without access to information on the kinds of species that inhabit these areas or their interactions with humans, conservation planners are likely to continue to overlook tropical dry forests while creating protected areas. For example, only 14 percent of the dry forest sites that were studied by Karina Banda her and colleagues were protected.

The future of tropical dry forests

In a discussion paper for the Center for International Forestry Research, Rueben Blackie and his colleagues identify the following major threats to tropical dry forests: they are often found in areas with a large population, they are rarely protected, and they are considered less valuable in carbon trade schemes because they usually store less carbon than other forest types. In addition, most conservation programs do not classify dry forests as a separate forest type, despite the differences in climatic conditions, species, and species interactions.

Dry forest species have to learned to thrive in challenging and varied climatic conditions. For example, the Ecuadorian ceibos tree has adapted to a long dry season by developing a green bark which allows photosynthesis to continue even after its leaves have fallen off. Because of their proximity to dry forests, people have interacted with these species for centuries. Traditionally, the soft fiber of the ceibos tree was used to stuff mattresses and pillows, and some communities continue to do so today. However, the resilience and socioeconomic value of tropical dry forests has not prevented their rapid destruction in recent years. Taking action to conserve these forests can protect unique species and support communities in many previously overlooked regions.